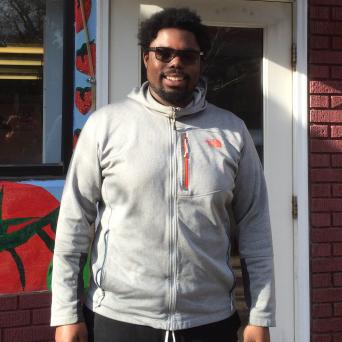 Where he’s from and lives now: East Mt. Airy, with his mom, Marsha

How he got to Weavers Way: He was a junior at West Chester University, living on campus and majoring in communications studies. He got a job part time at Bacchus Market and Catering in Center City, but had a hard time commuting back and forth from West Chester. Prior to his last semester, he moved back home and applied for a full-time opening in the deli.

Education: He earned a bachelor’s in communications studies at WCU in December 2017. He’s also a graduate of C.W. Henry School, across from the Mt. Airy store.

Thoughts on the job: “Overall, I like it. I’m very much a people person, so as much as I love learning new stuff about cheeses and meats, which is really interesting, I enjoy the personal connections I have with the members, customers and my coworkers … even though we’re in a hectic working environment, I value that most — the communal feel of the Co-op. [It] definitely is one of the benefits of coming in every day.”

Outside pursuits: He writes short stories, plays and screenplays, and had a couple of one-acts produced in college. His influences include Franz Kafka, James Joyce, Stanley Kubrick and Woody Allen. His ultimate goals are to write professionally and to become a filmmaker. He’s also a big soccer fan, and follows Chelsea FC in the English Premier League.

Thoughts on the Co-op: “I feel there’s an environment of consciousness … It’s a whole culture that I wasn’t really too exposed to … It’s not just about the food that we bring in … it’s also about bringing the neighborhood together for various reasons … it’s intoxicating, in a way. [It] kind of brings you into the community and makes you feel comfortable.”