Part 1 of 3: How the Pandemic Turned Our Black Ink to Red | Weavers Way Co-op
Skip to main content

Part 1 of 3: How the Pandemic Turned Our Black Ink to Red 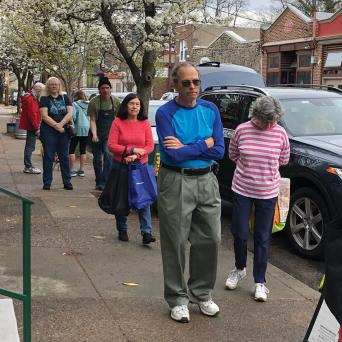 This is the first in a three-part series on how the outbreak of COVID-19 affected operations at Weavers Way.

Every day brings news of businesses laying off employees, forcing staff to take pay cuts, or filing for bankruptcy in the wake of COVID-19. Nonprofits are struggling to raise enough funds to keep doing their work. Meanwhile, Weavers Way has had its own struggles.

“We’ve made the strategic decision in the middle of the pandemic to operate at a loss,” said General Manager Jon Roesser. “We’re well positioned to do that; we’ve got ample cash in the bank.”

The Co-op’s 2020 fiscal year ended June 30, and it would have been another profitable year if not for the pandemic.

“We were in the black going into April. In the fourth quarter (April through June), we incurred expenses that resulted in a loss for the year, although I don’t know how much just yet,” Roesser said.

He’s waiting on the auditor’s report on fiscal 2020, but shared some sales numbers which give a good picture of the Co-op’s operations for five of the first six months of the calendar year. He did not include March because while sales the first two weeks were pretty normal, the rest of the month was skewed by heavy shopping, as people braced for lengthy periods of home confinement.

“Before the pandemic, sales in the Mt. Airy store during the first two months of this year were up 4.4 percent over the same period in 2019,” he said. “During April, May, and June, sales in Mt. Airy were down 4.7 percent compared to that same fourth quarter in 2019.”

Sales in the Chestnut Hill store dropped even more. Pre-pandemic sales there in January and February were up 3.9 percent over the same period last year, but were down 9.4 percent in the fourth quarter compared with 2019.

“Chestnut Hill was hit in a way that Mt. Airy hasn’t been for two reasons,” Roesser said. “First, the hot bar, soup station and salad bar were shut down. Second, a certain percentage of our sales in Chestnut Hill were derived from Germantown Avenue foot traffic, which evaporated.”

Chestnut Hill Assistant Store Manager Valerie Baker called the hot bar operation “easily the backbone of our store.” Prepared food accounted for up to 25 percent of the store’s total sales before the pandemic.

According to Baker, prepared foods departments in grocery stores were created to turn products that were either imperfect or over ordered into profit. “It was a great way to be more sustainable and produce less waste,” she said. “When COVID-19 hit, this option was eliminated completely and slowly replaced with ready-to-eat, preportioned, and prepacked meals to go.”

The Chestnut Hill store is experimenting with a return of the hot food bar, but shoppers will not be allowed to serve themselves. Instead, staff will handle the food and will be separated from customers by plexiglass.

The hot bar, soup station and salad bar have also disappeared from the Ambler store. But while Mt. Airy and Chestnut Hill have seen sales drop, Ambler’s customer count and sales have taken off. The store’s numbers were up during the first two months of this year compared to last year by 5.7 percent. From April through June, sales were up 62.5 percent over the same period in 2019.

“That’s a combination of sales migration from the Mt. Airy and Chestnut Hill stores — people feeling more comfortable shopping in Ambler,” Roesser said. “Also, early on in the pandemic, Ambler received a lot of accolades on social media for being a safe place to shop, and so we captivated some new business.”

Recent Co-op member Connie Walsh is part of that new business. She was shopping in Ambler on a Saturday morning. “I’ve been to the Mt. Airy store a few times,” she said, “but I find it crowded. I am definitely more comfortable here in Ambler. They have wider aisles.”

NEXT MONTH: The steeper cost of doing business, and the change in Co-op shopper culture.