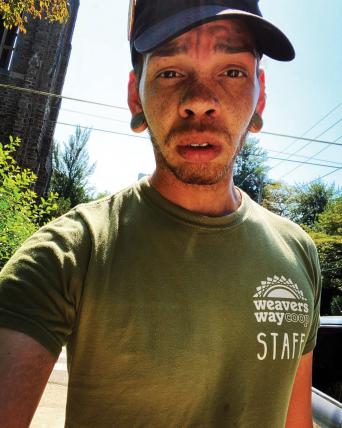 Where he’s from/where he lives now: Harrisburg/West Philly, with his boyfriend, Alfonso.

How he got to the Co-op: He got a job in the deli at a Giant in Harrisburg right after he graduated from Harrisburg CTA High and stayed there for 10 years. After relocating to Philly about five years ago, he was hired at DiBruno’s Ardmore location to do charcuterie and prepared foods. From there, he went to work in 2018 in the bakery at Creekside Co-op in Elkins Park, where he stayed until it closed that December. Staff there told him about an opening in Mt. Airy Prep Foods.

Outside pursuits: He’s an accomplished baker who sometimes shares his creations with staff. He’s also a self-taught artist who draws, paints, sketches, knits, crochets and does macrame’.

Long-term goal: He’d like to own a bakery someday.

The Co-op difference: “This whole company is like a family — anything you need, someone can get it for you if they have it…even if your manager can’t do what you need done, there’s always someone else who’s willing to help — no matter who it is, where they’re at, what department. And that’s what I like.”