The Power of Mint Has Deep Roots in Black Culture

by
Constance Garcia-Barrio, for the Shuttle 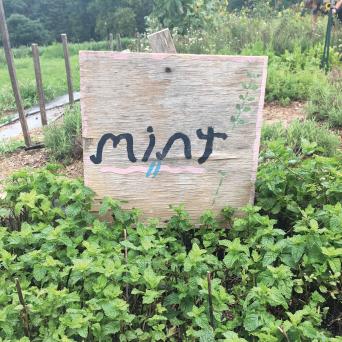 “Your mint’s running amuck,” my neighbor, an avid gardener, said one sunny afternoon. “Let it go much longer, you’ll need a machete to hack it down.”

Despite the warning, I meant to let the mint keep growing, though I didn’t say so. Mint has wound its way through generations of many of us Black Americans.

In his 1801 book “Materia Medica,” American doctor and publisher Samuel Stearns wrote about a 72-year-old man who was cured of kidney stones by taking the expressed juice of red onions and horse mint. “In about a week, the stone began to dissolve, and the cure was completed in about six months,” Stearns wrote. “The discovery was made by a Negro in Virginia, who obtained his freedom thereby.”

My ancestors didn’t claim such stellar results, yet mint has long played a role in our health. From my great-grandmother Rose Wilson Ware or just “Maw” came herbal remedies from slavery time.

Born into bondage around 1851 near Spotsylvania County, VA, where “Roots” was filmed, Maw lived until 1964, reaching the age of 113 years. For her and many another enslaved Black people, herbal medicine meant survival. She used mint for stomach complaints and to ease morning sickness — maybe on the advice of Aunt Alsie Ellis, the local midwife — during her pregnancies with the first generation of children born free in our family.

When my mother put down roots in Philadelphia in the 1920s, she hid some of her heritage, afraid that being both Black and Southern would shackle her to low-wage jobs. She hired a speech therapist, worked with him for two years, and erased her Southern accent.

But Mom didn’t conceal her use of herbal remedies. When anyone had a chancy stomach, she would cut a mint leaf into tiny pieces and add them to a teaspoon of sugar for the family member or guest. Mom also used mint transplanted from Maw’s farm in Virginia to add a cooling bite to her iced tea.

In time, I learned that mint could not only flavor tea or slow-roasted lamb, but my life. Before Mom moved into assisted living, I took a few shoots of mint — which was flourishing years after she had transplanted it from Maw’s land — and put them in the near corner of my front yard, ready to hand. Now, when I feel the need of Maw’s strength, I pinch off a leaf and eat it, a spiky green prayer.

Mint holds yet another dimension, I found. Some years ago, aching to fold into my life rituals lost or frayed during slavery time, I became initiated as a priestess in the Yoruba religion, a sister tradition to VoDun. My godmother, who led the ceremony, once explained that taking a mint bath can open one’s life to good energy.

So, I said nothing to my worried neighbor, but I let my mint grow till I had enough to cover the bottom of my old clawfoot tub. I turned on the hot water one night, and after an amen or two, I climbed in. The mint’s sharp scent left me feeling cleaner in body and spirit.

I admit that my neighbor has a point, that I would probably have to rent a backhoe to dig out all the mint. And pink daisies would prettify my little yard. But given a choice, I would rather have that mess of unruly mint, because it reaches all the way back to Maw.