Before the DNC, There Was the March for Climate Change | Weavers Way Co-op
Skip to main content

Before the DNC, There Was the March for Climate Change 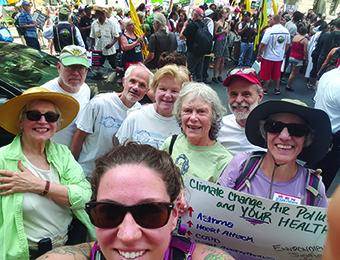 On Sunday, July 24, the day before the Democratic National Convention kicked off in Philadelphia, 10,000 people marched down Market St. to display their concern about climate change. The weather cooperated, not to make the marchers more comfortable, but to make a point. It was 100 degrees, a sign of what we might to expect in the future. Weavers Way’s Environment Committee was well represented with half a dozen of us plus three family members. It felt good to know that so many people cared enough to walk in the sun on a very hot day to let the world know climate change is real. We hoped some of the world was listening. The next day, there was a photo in the New York Times, but no story.

The march was preceded by a rally City Hall Courtyard. The first speaker was City Councilwoman Helen Gym, who declared, “Our cities and our elected officials can no longer continue to sleepwalk their way through a climate crisis of gargantuan proportions that threatens not only our future, but our current way of life.”

Wenonah Hauter, executive director of Food & Water Watch, also spoke, noting that when the organization first called for a ban on fracking, “it was viewed as a really marginal issue, but our movement has expanded dramatically and has become mainstream. . . . Today, more Americans oppose fracking than support it.” The final speaker at City Hall was Laura Zuniga Cáceres, the daughter of murdered Honduran activist Berta Cáceres. Sharing a quote from her mother, Cáceres exhorted in Spanish, “Wake up, humanity! Time is running out!”

The marchers then slowly made their way toward Independence Hall, armed with colorful and dramatic signs, banners and costumes. Food & Water Watch provided large containers of water at two locations. A small group of police on bicycles were riding next to us. I asked each officer if he or she needed water. Each smiled and declined but seemed appreciative.

The march paused in front of the Marriott Hotel, probably to catch the attention of DNC delegates who might be staying there. We wanted our presence known.

Most of the signs referred to climate change, banning fracking and promoting sustainable energy. Attention was drawn to the impact of fossil-fuel extraction on rural and poorer communities. A group of indigenous people walked together and sprinkled the crowd with healing herbs, and at Independence Hall, members of the Ramapo Lenape Nation from North Jersey, who have battled Ford Motors over the toxic Ringwood Mines landfill, led a prayer.

Activist and Cornell biology professor Sandra Steingraber was another speaker at Independence Hall. She is the author of “Living Downstream,” about toxins in her community in Illinois and her resulting cancer, and “Raising Elijah: Protecting Children in an Age of Environmental Crisis.” I highly recommend both books.

Afterward, those of us from the Environment Committee walked back to the train station to return home. None of us drove to the march, of course!