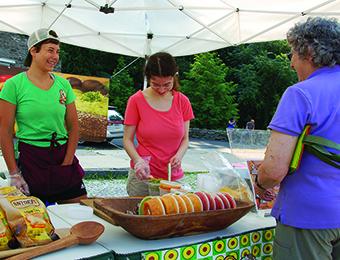 Anita's at the Saturday farmers market in Chestnut Hill.

About a dozen years ago, Mauricio Mendez’s grandmother began making guacamole and selling it at farmers markets in South Florida. Mauricio helped out, learned his grandmother’s recipe for guacamole, and developed his own mango salsa and pico de gallo. The business school graduate had known from a young age that he wanted to be an entrepreneur, and when his grandmother decided to return to her native Colombia, Mauricio got his chance.

“Then about six years ago I moved the business to Philadelphia,” he said from his rented kitchen space in Frankford. “I had visited a couple of times and liked the city, plus it is in an ideal location, geographically.”

He began by selling at farmers markets in Pennsylvania and New Jersey, while also making the rounds at area specialty stores. It took time. After Di Bruno’s became the first large specialty store to stock Anita’s, other stores took note. One of those was Weavers Way Co-op.

“I visited Weavers Way several times over the course of about a year,” Mauricio said. “I just kept coming back with samples and asking them to carry Anita’s until they finally said yes.”

One major factor helping Anita’s products land at Weavers Way and other stores is Mauricio’s pitch, which is unusual among specialty products. “I sell Anita’s on consignment,” Mauricio explains. “That way, the stores are not taking the risk if the shelf life on the package expires before it is sold. I’m taking the risk instead.”

So he is perhaps a bit more conservative stocking his product to make sure it’s always fresh. If stock is running low, he’ll deliver more. For the stores selling it and for their customers, it’s a winning proposition.

Mauricio’s business knowledge is paying off in other ways, such as keeping up with the latest technology. There’s a thin plastic cover under the lid of Anita’s containers; underneath that little piece of plastic is nitrogen, inserted during the packaging process.  “It extends the shelf life,” Mauricio says. “The products used to have a shelf life of 10 to 12 days; now they keep up to three weeks.”

Anita’s now supplies more than 50 stores with guacamole and salsa. With a staff of about 20 people and a kitchen working eight hours a day, seven days a week, Anita’s also sells at farmers markets from West Cape May to Colts Neck, NJ, and Newark, DE, to Ardmore. Business is good and Mauricio couldn’t be happier.

“I’m happy to make something that speaks for itself — it’s the real thing. And I like providing something good for people.”