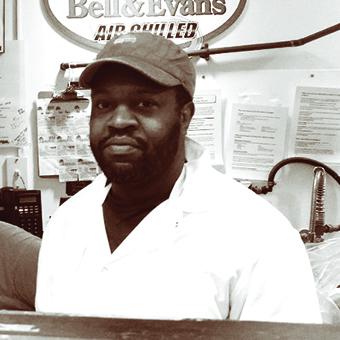 The Weavers Way community was shocked and saddened by the passing of Anrico Stevenson, a meat cutter in the Chestnut Hill store, and his wife, Tyronda, on July 22.

Rico, 40, worked in the meat room for three years. Dean Stefano, Chestnut Hill store manager, called Rico “a great guy to work with. …It seemed like he was going in a great direction, and he’s going to be greatly missed.” Ron Moore, meat/poultry/seafood manager in Chestnut Hill, considered Rico to be his best friend of the last 10 years. “Rico was always there for me, on and off the job,” Ron said. “I can’t replace [him]. Friendship is hard to replace.”

Rico was from Teachey, NC, a small town in the southeastern part of the state. He and Tyronda leave behind four sons, ranging in age from 19 to 5. The Co-op is setting up a memorial fund to help support MarQuel, Anrico, Dymere and Logan. For information on how to donate, email memorialdonations@weaversway.coop.