by
Alexandria Evenson, for the Shuttle 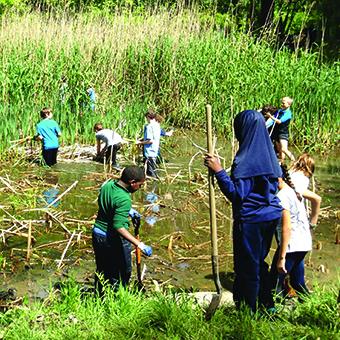 Fourth-graders put their waders to good use last year clearing phragmites from the Awbury pond.

You may be familiar with the definition of “catalyst” from chemistry class. This word is also applied to leaders, innovators and entrepreneurs to describe their snowball effect on the world around them. It is not very often that a group of fourth graders can claim this title, but what if they were given the opportunity to do so?

Liz Biagioli, Wissahickon Charter School’s environmental educator, saw a golden opportunity for her fourth grade students to be catalysts at Awbury Arboretum next door. Using the Arboretum’s overgrown pond as a case study, students could participate in a hands-on service learning project that would teach them more about watersheds, native species and their neighborhood’s history than a textbook ever could. But their work also had the potential to promote — catalyze — a larger rehabilitation effort.

At WCS, a public charter school with an environmental mission, students study a different environmental theme every year and complete a related action project with their class. One year, first graders studying waste introduced composting to the school’s cafeteria. Second-graders focus on agriculture every year, and care for the school garden. “We’re committed to helping to raise the next generation of environmental stewards,” said CEO Kristi Littell, who was the school’s environmental educator when WCS opened in 2002.

The location of Wissahickon’s second campus, at Chew Avenue and Washington Lane, was selected for its proximity to outdoor spaces like Awbury Arboretum and Weavers Way’s Mort Brooks Memorial Farm.

In addition to the Arboretum, WCS was able to partner with another like-minded organization to make this project a reality: The Captain Planet Foundation (captainplanetfoundation.org), which has funded more than 2,000 hands-on environmental education projects across the world. With a grant from CPF, WCS was able to purchase materials students would need to monitor and rehabilitate the pond: water-quality kits, collecting containers and knee-high waders!

When it comes to service-learning projects, the priority is, of course, the learning. But it was Biagioli’s hope that the students’ work would benefit the Arboretum and set the stage for further rehabilitation work. Karen Flick of Awbury Arboretum Landscapes, the for-profit landscaping firm affiliated with the arboretum, worked closely with the students. “As part of the program [students] pulled invasive plants and tagged natives with pink ribbon,” Flick said. “So when other volunteers come, I can point out the pink tags are good plants.”

Students also removed invasive phragmites reeds, cleared trash and created public-service announcements. They  have educated other students, staff and families about how every individual can improve water quality. Commented one fourth grader: “I am so glad we learned about these issues because I always thought a storm drain was a trash can.”

These students’ learning, inquiry, and service has also influenced the Arboretum to begin a larger restoration project of the pond.

Returning to school as fifth graders this month, these students will spend the year studying local habitats and learning more about what it takes to be stewards of the environment. They will be the first WCS Awbury class to go on an overnight trip to the Outdoor School in Horsham. They will take many trips next door to Awbury Arboretum, along with hundreds of other K-8 WCS students and thousands of other school and community groups that visit the grounds every year.

“Awbury is green space meant for the community,” Flick said. “We really need to put the energy forward, like the children, and take these spaces on as vital parts of our community.”