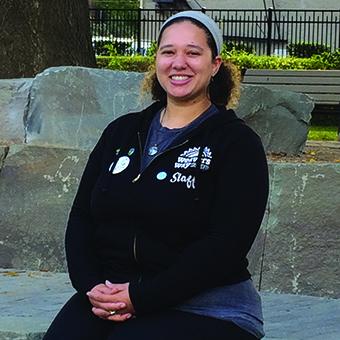 After more than five years as a cashier and manager on duty at Weavers Way Chestnut Hill, Gabrielle Anderson knows all about Co-op shoppers and their needs. So her transition from “front end” to customer-service coordinator for the store last fall went down as smoothly as, well, a spoonful of your favorite yogurt.

Gaby, 26, now spends most of her days performing a mishmash of essential tasks — everything from helping with refunds and responding to customer comments to putting out shelf tags and jumping on the register as needed.

Her history with Weavers Way goes back to her childhood in Mt. Airy, when she and her mom would work together to complete the family’s working member hours. Gaby, who was adopted as an infant by Dave and Bernadette Anderson, has fond memories of spending weekend mornings in the basement at Carpenter Lane store, wrapping chicken or doing bulk packing.

“I would look forward to those days,” she said. “Seeing behind the scenes, to me as a young kid, it was cool. . . . being able to say ‘I did that. I packed that.’ ” When it came time to pick a high school, Saul was Gaby’s only choice, mainly because she was an animal lover who had already spent many an afternoon  petting the horses at the school’s pastures on Henry Avenue. To switch things up, though, she concentrated on plant studies.

During Gaby’s sophomore year at Saul, her mom’s breast cancer, which had been in remission for several years, reemerged as pancreatic cancer. Bernadette battled the disease for a year before she died in June 2007. Gaby found that she had to take the lead in making sure her and her dad’s basic needs were met.

Gaby went on to the University of Delaware to study animal science. She got through three semesters before a major tuition increase forced her to drop out. She attended community college for a while, but then ran out of money.

Her need for a job coincided with the planned opening of Weavers Way Chestnut Hill in 2010. “I don’t know if it had anything to do with it, but I just put little marks on [the application] like ‘Hey, I’ve been a longtime member, I know Miss Stephanie, I know Rick,’ “ she recalled, name-checking cashier Stephanie Johnson and Mt. Airy store manager Rick Spalek.

In her current job, Gaby, who got her own place in East Mt. Airy just over a year ago, enjoys the freedom to get away from the register and have more of a management role. But her time at Weavers Way has only cemented her sense of attachment to the place.

“When you grow up with something, it becomes a part of you,” she said. “It was just ingrained in me that the mission was good, the quality of the food was better than a lot of places. . . . I just love the community.”