by
Ellen Wert, for the Shuttle 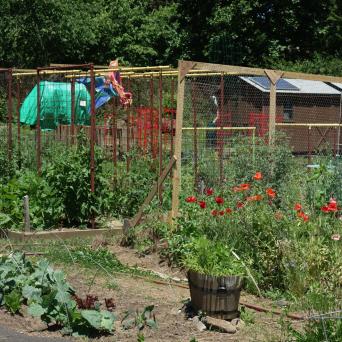 The Old Tennis Court Farm is now the community’s garden.

On May 18, Natural Lands, acting on behalf of the community, purchased the 0.65-acre parcel of land at 5407 Wissahickon Ave. in Germantown — the site of the Old Tennis Court Farm community garden.

In the coming months, Natural Lands will transfer the title to Neighborhood Gardens Trust, with which the Old Tennis Court Farm community garden has been affiliated since reopening in May 2017.

Founded in 2009 on land that was once used as tennis courts for Germantown Friends School, the garden was closed in 2015 so the land could be sold. A community effort to protect the site from development and preserve the garden led to a partnership between the garden’s leadership, Natural Lands, Neighborhood Gardens Trust and the Friends of Cloverly Park, which abuts the garden.

Working together, the partners raised the purchase price through a combination of a grant of $225,000 from the Pennsylvania Department of Community and Economic Development’s Greenways, Trails and Recreation program and community-based fund-raising, for which Germantown United CDC served as fiscal sponsor.

“We thank Germantown Friends Monthly Meeting for giving the community the opportunity to purchase the land and for entering an agreement with Neighborhood Gardens Trust in 2017 so that the garden could be reopened during the run-up to the closing,” said Mark Kearney, a gardener and one of the project’s leaders. “We thank the many people in and beyond the community who donated so generously to the project. We thank Germantown United CDC for serving as fiscal sponsor for the community fund-raising. And we especially thank Natural Lands and Neighborhood Gardens Trust for acting on the community’s behalf.”

“Now and for the years to come, families and individuals will be able to grow fresh, organic vegetables and fruits not only for their own tables but also for those of neighbors in need,” Kearney said. Each year, up to eight 12-foot-square community plots will be dedicated to growing fresh, organic produce for local food-security programs.