Passionate Gardener: No Roots, No Seeds, No Problem 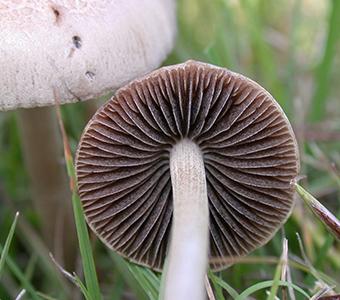 Mushrooms are not really “plants” but are part of the fungus kingdom. What we would recognize as a mushroom is actually the fruiting body of a fungus. The purpose of the mushroom is to release reproductive spores. All mushrooms have a cap and gills. The cap protects the gills, which make up the reproductive surface, until the mushroom pushes up through the ground. Then the cap expands and spores are released from the gills into the wind.

(Be careful! Most mushrooms are not edible and many are actually poisonous. Some just make you very sick, but others will kill you. Don’t harvest mushrooms in the wild unless you know what you are doing.)

Mushrooms do not have roots, leaves, flowers or seeds. They have no chlorophyll so they need to interact with plants to create sugar that plants manufacture by taking in water, carbon dioxide and sunlight. The fruiting body is really not the whole mushroom, just the reproductive part, and each mushroom spore is a single cell.

Mushrooms may or may not have a stem. In fact, most fungi are composed of thread-like filaments called hyphae and ultimately form a mass or “body” called a mycelium. They live in the soil, taking in nutrients as they help break down the decomposing soil. Their biggest ecological function is their interaction with plants to form mycorrhizae. Mycorrhizae result from the fungi connecting with the root cells of plants. The fungus provides nutrients to the plants (especially phosphorus) and the plant provides the fungus with carbon that it converts into sugar compounds.

Mushrooms sprout up in our lawns, especially after wet weather. When the weather gets colder or the soil dries out, they disappear. They live on organic matter in the soil such as buried logs, old tree roots or stumps. They are unsightly but they rarely do damage to your lawn and anyway, there is no practical way to eliminate them. All you can do is rake them up or mow them down. When the buried wood matter has totally decayed, the mushrooms will be gone.

Mushroom consumption has been known since ancient Egypt, mushroom cultivation began in France in the 17th century. Pennsylvania is the top producer of edible mushrooms in the United States, with 65 percent of the total.

Since mushrooms have no ability to make their own food, commercial producers need a special growing medium for a successful crop. Laurel Valley Farms in Chester County creates the mushroom compost for mushroom farmers.

Every year, Laurel Valley Farms buys 40,000 tons of hay and 25,000 tons of straw. These ingredients are broken down and watered for three weeks, then blended with poultry manure, corn cobs and horse manure and bedding. These additives provide bacteria and other micro-organisms to further break down the material. This process creates the carbon that becomes an important food source for the mushrooms.

This “mushroom soil” is loaded into small, dark buildings called “doubles” and treated with mushroom spores. The mushrooms grow in “flushes” and about 60,000 pounds a day are harvested from a typical mushroom house. After three flushes, the compost is replaced and a new cycle begun.

However, this spent compost still has lots of valuable nutrients. It is composted again and recycled for use in urban gardening initiatives, farming applications, nurseries, golf courses, by landscapers and green roofs. Basically, it is turned into high-grade soil; the process has been going on since the early 1900s.

Every week, Laurel Valley Farms recycles 450,000 gallons of storm water, 75 tons of corn cobs, 7,000 cubic yards of horse bedding, 40 tons of cocoa shells and 600 tons of poultry manure. A total of 7,000 yards of mushroom compost is recycled every week — enough to cover 157 football fields with a quarter-inch of compost.

Thanks to Laurel Valley Farms for providing much of the information for this article!