Fresh Tofu: A Legacy for Us & for the Maker | Weavers Way Co-op
Skip to main content

Fresh Tofu: A Legacy for Us & for the Maker

by
Michael Frost, for the Shuttle 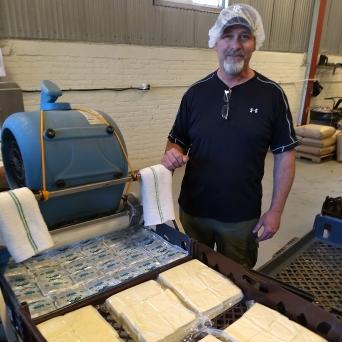 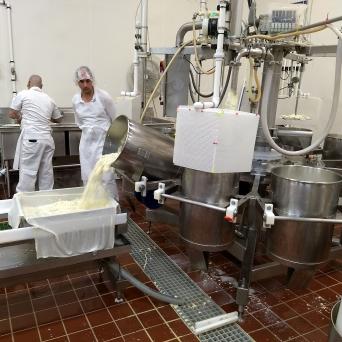 In its heyday, Allentown, PA, was the home of Mack Trucks’ main assembly plant, a sprawling industrial complex in the south side of the city that straddled 10th Street from Harrison all the way down to the banks of the Little Lehigh Creek. For the past 20 years, however, employees in the 17,600 square-foot building at the southern edge of the property have been churning out a much different product: organic tofu.

Fresh Tofu got its start in nearby Easton in 1984, where much of the work was originally done by hand. Allentown’s Mack Trucks facility closed for good in 1986, and Fresh Tofu moved into the former tractor-trailer factory a decade later as part of its expansion. The current owner and president, Mark Amey, an Allentown native, was working various jobs during that time period, including bartending and construction. “Jobs were scarce,” he said.

Amey, now 55, joined Fresh Tofu as a delivery driver soon after its relocation. During his ensuing 20 years at the company, he “did a little bit of everything,” he said, including delivery, production, and sales—something he says the company no longer needs, instead relying on its reputation and word of mouth.

He purchased the business from its owner of 30 years, Gary Ambramowitz, this past January. Abramowitz, who co-owned the company with its founder, Jeff Connorton, for three years before buying him out years ago, has moved to California, but still comes in to pick up tofu whenever he is back in the area. Amey strives to maintain his predecessor’s “Japanese Zen tofu-making type of thing.” While Fresh Tofu uses modern machines these days, “we try to duplicate what they used to do by hand,” he said, adding that the machines are formulated “to simulate that same process.”

A little background: “Tofu” is the Japanese word for the soft white blocks of soybean curd, and most of the terminology around its manufacture is Japanese as well. Originating in China at least 2,000 years ago, tofu was introduced to Japan in the eighth century alongside Buddhism; it was an important source of protein in the vegetarian diet the monks followed (as it continues to be today). Philadelphia’s own Benjamin Franklin sent soybeans across the Atlantic to a friend in 1770, touting their use in a “special cheese” called “tau-fu.” However, it would take another 200 years for tofu to really find a place in the broader American diet (and lexicon).

Along with traditional Japanese techniques, taste and consistency are also key aspects of Fresh Tofu’s ethos. “I’ll cut open a piece every day to make sure it’s good,” Amey said.

The company now has 21 employees who aim to keep it that way. Most have been with the company a while; the newest employee arrived about a year and a half ago. “The men and women who work here all take pride in what they do,” Amey said.

It all starts with the soybeans. Organic Vinton beans are sourced from the Finger Lakes region of New York. Fresh Tofu processes 56 bags — about 6,500 pounds — of dried beans every day, which ends up as 3,500-4,000 pounds of finished tofu.

After soaking overnight, the beans are ground into a slurry, then strained to separate the “milk” from the okara (pulp), which Fresh Tofu delivers for free to a local organic dairy farmer to complete the organic process. “The cows love it,” Amey said.

The liquid is then pumped over to a 12-barrel carousel curding machine, where it is mixed with nigari (desalinated seawater), rotated and agitated to produce curds and whey, not dissimilar to cheese. After the turning and churning, the whey is drained off and the curd is poured into forming trays lined with cheesecloth, where it is pressed into giant tofu slabs. These are then cut into one-pound blocks, which are transferred to an ice bath to set and cool.

At this stage, tofu for customers who prefer their tofu unpasteurized is placed directly into buckets for delivery, while the remaining 80 percent of the product is vacuum-sealed in food-safe plastic and sent off to the pasteurizer for the final step of the process. Start to finish, making tofu takes a little more than 24 hours.

Within another 24 to 48 hours, most customers will have received their share of the fresh batch. Along with Weavers Way, these customers include nearby restaurants, Whole Foods stores throughout the area and Moshe’s Foods of Philadelphia (another Weavers Way vendor). Fresh Tofu also has customers farther afield, spanning the East Coast from Florida to New England.

In addition to its standard-bearing firm tofu, Fresh Tofu produces several varieties of baked tofu, No-Egg Salad and, each Thanksgiving, about 500 Tofu Turkeys, which it has been offering since 1992, a few years before the more widely known Tofurky was introduced. According to its website, the 1 lb., 10-oz. hand-scored, marinated and baked boneless bird “is not only delicious, but creates an amusing but elegant centerpiece for any holiday table.”

Weavers Way sells about 250 pounds of Fresh Tofu a week — more than half of it in the original store in Mt. Airy where the company first started delivering its wares in 1986 or 1987, according to Purchasing Manager Norman Weiss. But no Tofu Turkeys, at least not anymore. “I forget if we stocked them or it was just by pre-order,” he recalled. “Never sold a lot of them.”.

At its core, Fresh Tofu is a family business. The plant runs five days a week, sometimes six, “if we need to. I try not to do that because my employees work really hard during the week and they need that weekend time for themselves and their families,” Amey said. His wife, Aurora, serves as the company’s accountant, and their son returned to work in the factory a week after his last college exam in May. He was slated to come in the day after, but, as the end of the semester drew near, called and asked if he could postpone his start date. 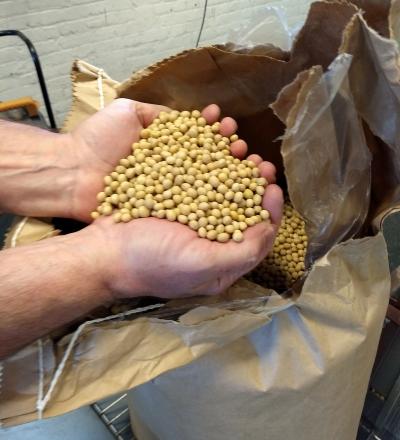 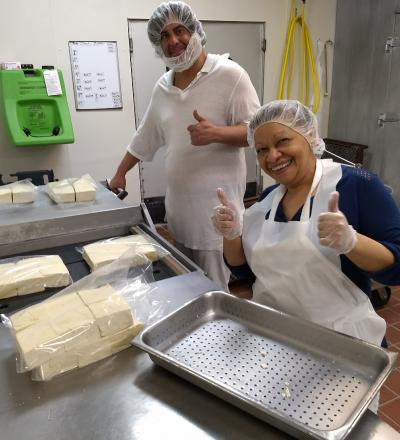 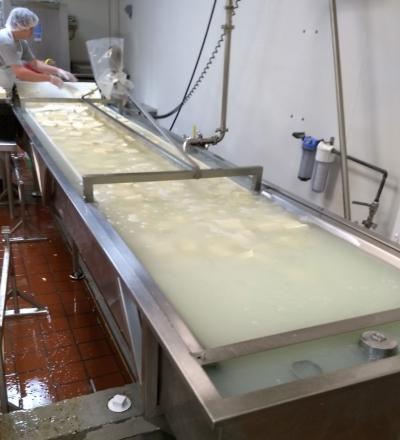