by
Larry Schofer, for the Shuttle 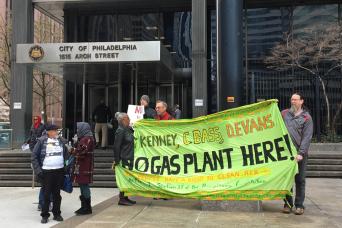 SEPTA is a transportation company deeply involved in local politics because so much of its funding comes from federal, state, and city sources. Its board has many members appointed by politicians, and as such, it is especially sensitive to political pressure. The connections and larger issues involved were explored by Peter Winslow, local community environmental activist, in a public presentation sponsored by Northwest Village Network in late February and updated last month.

Since the spike in the supply of natural gas due to enhanced fracking from the Marcellus shale formation in northeastern Pennsylvania, producers have been looking for customers and additional pipelines to bring their product to major cities and seaports. Winslow believes that political pressure has been exerted on SEPTA to be a larger customer for this material, which explains why they built a power plant fueled by natural gas at their Wayne Junction site in Nicetown. The plant was completed in January, but has not yet been opened due to significant community opposition.

The Wayne Junction substation is a major point within the SEPTA system, and the authority owns a large amount of property in the area. A large number of trains come through this station, and the current Midvale bus depot is the largest in the city, with 315 buses.

“These buses cause an enormous amount of pollution, probably more than the gas plant,” Winslow said. “The pollution from the nearby Roosevelt Expressway adds even more contaminants, but we’re hoping to curb this environmental racism by opposing the gas plant.”

Asthma rates in Nicetown are among the highest in the country. Hospital admissions of children in the neighborhood due to asthma are approximately four times as great as the national rate.

The major opponent to the power plant has been 350 Philadelphia, the local chapter of 350.org, in cooperation with other neighborhood organizations. The number 350 refers to the tipping point for parts per million of carbon dioxide in the air; the level in Nicetown is over 400. The organization would like SEPTA to invest in clean, renewable energy. As an example, it has been proposed that the buses at the Midvale bus depot be converted to electric power.

SEPTA has been accused of various subterfuges to justify its investment in what is considered by outsiders to be a superfluous power plant. The authority contends the new line of power is necessary in case of outages, but Winslow noted that neither of the two underground lines has ever gone down. Problems usually occur in areas with overhead lines, not in the power generated by the Wayne Junction substation.

Critics of the plan have accused SEPTA of environmental racism because of the disparate and adverse impact on an area that has already been designated as an environmental justice area, defined as any census tract where 20 percent or more individuals live in poverty, and/or 30 percent or more of the population is minority. Appeals have been made to the Philadelphia Department of Licenses and Inspections, and a complaint has been filed with the Environmental Protection Agency. A final hearing for the appeals board of L&I is set for this spring. If the protestors lose that appeal, the most likely avenue left is a lawsuit.

The power plant can be opened at any time if permission is granted by licensing and legal authorities. Mayor Jim Kenney’s office has declined to oppose it, stating that it will have only a minimal impact on the environment in the area.