Weavers Way and the Wissahickon Watershed

by
Carol R. Collier, for the Shuttle 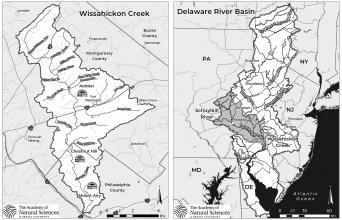 Did you know that all three Weavers Way stores are located in the Wissahickon Creek Watershed?

The Wissahickon Valley is a storied area with historic and environmental significance. A watershed is all the land that drains to a creek or river. The Wissahickon Creek watershed is 64 square miles and covers portions of Montgomery and Philadelphia counties. The creek, which runs for 23 miles, has an unassuming start in a spring under the parking lot of Montgomery Mall and meanders through 12 municipalities before it empties into the Schuylkill River just north of the top of Kelly Drive, near the Philadelphia Canoe Club.

The Wissahickon is a small but important part of a larger system. It is a tributary of the Schuylkill River, which in turn is the largest tributary of the Delaware River. The whole Delaware River Basin covers 13,500 square miles and provides water for more than 15 million people, including half of New York City’s potable water supply.

Do you know the source of your drinking water? Potable water in Ambler comes from a number of groundwater well fields in the Wissahickon watershed. The surrounding area is supplied by a combination of surface and groundwater sources by Aqua Pennsylvania, and also includes the Neshaminy Creek and Delaware River through the North Penn/North Wales water systems.

The City of Philadelphia draws 60 percent of its water supply from the Delaware River at Torresdale; the remaining 40 percent comes from two intakes on the Schuylkill River. The water supply for the Mt. Airy and Chestnut Hill sections of the city comes primarily from the Queen Lane water treatment facility and reservoir located on Henry Avenue, alongside the Roosevelt Expressway. Since the Wissahickon enters the Schuylkill at just about the Queen Lane intake, it makes up approximately 10 percent of the water supply. Many of you are drinking treated Wissahickon and Schuylkill water, so it is important to protect and enhance water quality in those watersheds.

At the Co-op’s two farms, Henry Got Crops Farm at W.B. Saul Agricultural High School in Roxborough and Mort Brooks Memorial Farm at Awbury Arboretum in East Mt. Airy, supplemental irrigation is used to water the fields. According to 2018 records for Awbury’s fields, the Co-op used 392,700 gallons of water, most of it during the summer and fall months when conditions are the driest.

Besides water supply, all three systems — Wissahickon, Schuylkill and Delaware — were important in the growing industrialization of our nation. In the mid-1800s, there were more than 50 mills on the Wissahickon, which, along with other discharges, contributed much pollution to our rivers and streams. The Schuylkill water was full of coal sediment, and the Delaware River near Philadelphia was so polluted that pilots could smell the sewage odors from their planes. Paint peeled off ships docked at the Navy Yard. The sturgeon fishery that once made Philadelphia the caviar capital of the U.S. and the shad fishery were decimated by pollution and overfishing.

But even though all three systems have had bad times, they are on the rebound. Around 70 species of fish can now be found in the urban portion of the Delaware, which includes Philadelphia, Camden, and Wilmington. Furthermore, people are also feeling more positive toward our waterways, and are discovering the multiple benefits of being close to water. For example, triathlons are now held in the Schuylkill River! We need to keep up this progress.

There are a number of organizations that care for the Wissahickon Watershed. The Wissahickon Valley Watershed Association covers the Montgomery County portion, and Friends of the Wissahickon represents the watershed area in Philadelphia. In addition, the Philadelphia Water Department is leading the “Green City, Clean Water” plan to reduce stormwater pollution.

Through the Delaware River Watershed Initiative, a multimillion dollar protection effort kickstarted by the William Penn Foundation, on-the-ground projects and policy changes, and work with farmers, land owners and municipalities, the goal is to restore water quality where the streams are impaired and protect the forested areas where water quality is good. The Wissahickon is part of this work. Learn more at www.4states1source.org.

Carol R. Collier is Senior Advisor for Watershed Management and Policy at the Academy of Natural Sciences of Drexel University, and the former executive director of the Delaware River Basin Commission.