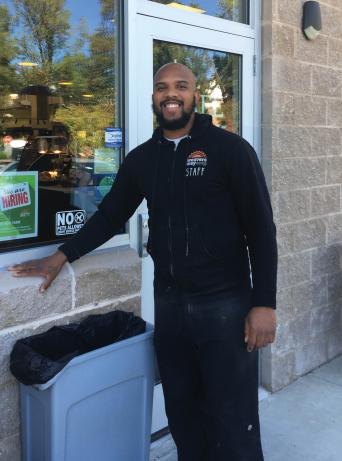 Since when: He was hired for the department in November, 2018 and promoted in July.

Where he’s from and lives now: Olney, with his fiancée, Jada, and their three children: daughters Zhakayf Abraham, 12, and Drew Abraham, 3, and son Cameron Abraham, 8. They are expecting a third daughter, Peyton, in January. He also has a stepdaughter, Aubrey Ava, 3.

How he got to Weavers Way: He started training as a butcher at age 19 at Young’s Deli in Olney. He worked there for three years, then applied to Shake Shack and got hired as a team member for their store at 30th & Chestnut streets. He later transferred to their 20th & Sansom Street location, and eventually became a supervisor, opening a store for them in Bridgewater, NJ. But after five years there, he missed working in the meat industry, and saw an opening for the meat cutter job in Ambler online.

Thoughts on the job: “My biggest challenge was going from delegating worker to worker to delegating manager to worker [but]…with my resources and the help I’ve got around me, it makes my job easier.”

Thoughts on the Co-op: “I think it’s great. To have people buy into something they actually support as far as their everyday living…to know that they invest in that…it’s amazing to see people highly involved in their day-to-day shopping.”