by
Karen Plourde, Editor, the Shuttle 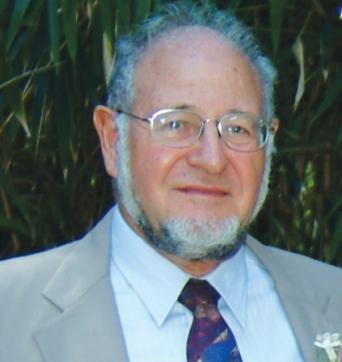 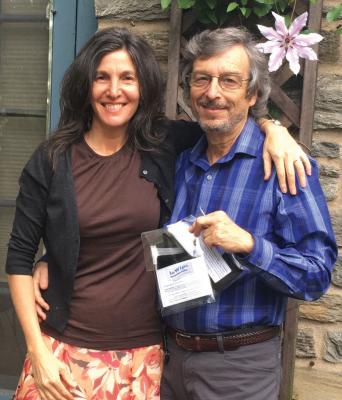 Stories abound these days about people using their imposed time off due to COVID-19 to get to long-tabled projects. Longtime Weavers Way members Elise and Max Rivers have done more than clean out their basement or pick up a new hobby; they’ve created a startup to produce, market and distribute reusable IoWipes — iodine-infused sponge cloths that can be used to sanitize and protect commonly-used surfaces in the home.

The IoWipe was invented by Elise’s father, Solomon Rosenblatt, late last year. It’s an offshoot of IoPlex, an antimicrobial bandage that Rosenblatt, a chemist and entrepreneur who worked for the Ford Motor Company and Aerojet General, among others, invented in 1995 to treat wounds that were slow to heal. At the time, he was already retired from Mercocel, a company he founded in the 1960s after inventing lint-free surgical sponges.

“He knew iodine would do a good job on the bacteria in those wounds, but we didn’t have a good technology to dose it without damaging the healthy tissue,” Elise said.

The IoPlex released a low dose of iodine slowly, allowing stubborn wounds to heal while maintaining the health of the surrounding tissue.

“He knew after he did the wound care piece that it would be an amazing consumer product, because if it can kill bacteria in wounds, it can kill bacteria on hands,” Elise continued. “And it turns out that iodine is not only a bactericide, but it is a broad-spectrum antimicrobial, which means it kills fungi and parasites and viruses and bacteria, not just bacteria.”

Rosenblatt, 90, has been wanting Elise and Max to investigate the consumer uses of IoWipes for years. But with Elise busy as the owner of Community Acupuncture of Mt. Airy and Max running his own mediation business (Two Rivers Mediation), neither had any time for an additional project. Having to temporarily close the acupuncture studio due to the pandemic changed that.

“Plus, COVID is sort of the perfect environment for this,” Max said.

The couple started advertising the products locally, including giving and selling the cloths from the acupuncture studio as they were preparing to shut down. Elise and all her practitioners have been using IoWipes at the studio for at least five years to clean their hands and some surfaces between patients.

“I discovered the pleasure of not having to go to the sink every time to wash my hands, and I also love that I don’t go through paper towels and I don’t go through tons of wipes,” Elise said. “…It’s reusability is what makes it so distinctive, because it’s self-sanitizing; if it gets some bacteria on it, it eats that, and then the next time, it’s ready for re-use.”

The standard IoWipe measures 7” x 7” and sells for $25 on the Rivers’ website (iowipe.com). It lasts about two months, and can then be returned postage-free for a discount on a future purchase. IodoRios (the couple’s LLC) will then reconstitute the wipes and donate them to those in need.

Other products available through the site include kitchen tray and counter covers and door “socks” in two sizes, for round doorknobs and door levers. They’re also looking to put together kits for different rooms in the house — the kitchen, bathrooms and sick room.

The couple has moved from making the products by hand to contracting with a manufacturer to produce them. Last month, they got an order for 200 door handle covers, and they’ve also been contact by a restaurant supply company interested in developing a distribution relationship with them.

“One of the things we’re enjoying about creating this company right here and now is that it’s a way for us to continue to give back to the neighborhood,” Max said. “…The next person we’re probably going to get is someone who will package things and label them and do shipping. We’re hoping to have a little cottage industry where people can work in their homes.”

Down the line, Max and Elise are hoping to capture the commercial market — gyms, restaurants, grocery stores, cleaning companies, to name a few. A key part of that expansion is to have the product tested for its effectiveness in killing bacteria and viruses; they’re in the process of hiring someone who can navigate that portion.

“This wipe has been tested for four difficult-to-kill foodborne bacteria, including e. coli,” Elise said. “With three swipes of the wipe, it completely wiped out everything on the plate.”

In the current climate, the sky appears to be the limit for the IoWipe’s growth — not bad for a product whose patent was submitted in January, and a company that’s been in business for less than three months.

“We expect it to explode, honestly,” Elise said. “There are just not enough multiple-use products out there. There’s too much throwaway.”