Honor the Red Covered Bridge with a Miniature Model for Home 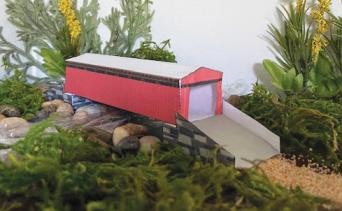 Thomas Mill Covered Bridge, a/k/a “The Red Covered Bridge,” is one of the most iconic places in Wissahickon Valley Park. It is thought to date back to an original bridge built in 1737, but is generally recorded as being built in 1855. The Bridge was restored in 1938 by the Works Progress Administration and again in 1999 with funds from the Fairmount Park Commission (now Philadelphia Parks & Recreation).

As with other bridges in North America built around this time, it was made of wood, which was more plentiful and less expensive than stone or masonry. The 86.5-foot-long, 18.66 foot-wide single-span bridge was later reinforced with vertical iron posts and wooden diagonal braces in a design known as the Howe truss, patented by Massachusetts constructor William Howe in 1840.

This landmark structure holds multiple distinctions. It is the only remaining covered bridge in Philadelphia, and the only covered bridge in a major U.S. city. In 1980, it was added as a Contributing Property to the Chestnut Hill Historic District of the National Register of Historic Places, and in 2015 was inducted into the Chestnut Hill Conservancy’s Architectural Hall of Fame, which honors “the community’s most treasured places.”

While it’s true that the Red Covered Bridge connects one side of the Creek to the other, its connections to people’s lives span generations. It has been a source of comforting constancy in an ever-changing world. If it could talk, the bridge would tell stories about all the park users who introduced it to their fiancés and babies, or told it about visiting it instead of going to work, or visited from other places like Europe, or made a pilgrimage after a cancer diagnosis or news of remission.

Since 2018, these stories and messages have been captured in what started as letters, then became entries into a small notebook, which was at first nestled between two boards just inside the Forbidden Drive side of the Bridge. Later, the notebook was housed inside a box built to hold it and encourage others to write in it.

Dozens of notebooks of love letters to the bridge have been filled with messages like:

“It is this bridge that serves as a symbol for what all of us want…to connect 2 sides of difference knowing a similarity lies between.”

“Thank you for allowing me to see that there is always another side. That our journey does not end here. And that I am always walking with other souls.”

With stay-at-home policies and social distancing keeping people from visiting the park as often as they would like, Friends of the Wissahickon wants to bring the bridge to you with your own miniature paper version. Go to fow.org/virtual-valley/larks-and-recreation/ and print, cut, fold, and tape it together, then proudly display your little bridge at home. Or take the #CoveredBridgeChallenge — create your own little scene and pose the Bridge in it, then photograph your creation and tag @FOWissahickon on social media. (Many thanks to Bryan Green at paperfoldables.com for donating the design.)

The Red Covered Bridge is just one more reason why we love where we live. In fact, that’s the theme of FOW’s 2019 annual report, now available on our website. (Digital-only this year, due to COVID-19 constraints.)