by
Leah Siemiarowski Wright, for the Shuttle 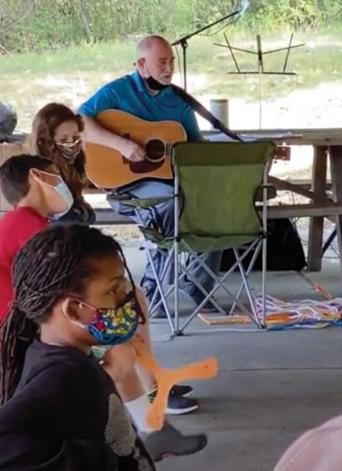 For 25 years, Weavers Way member Art Miron has served as director of music for Jewish Children’s Folkshul and Adult Community, engaging people through music. Even during these times of being physically distant, his voice has continued to serve as a bedrock for our community and brings us together in person and in song.

Folkshul, based in Chestnut Hill, is a cultural Jewish community for families and adults. Miron has been a member of the community since 1991, when his daughter Jessica joined.

Miron learned about Folkshul from neighbors with children the same age as Jessica who were members. He and his wife, Trish, were seeking a program for their daughter that would connect her to Jewishness in a welcoming and diverse community. Trish started teaching that first year, and Art joined her as a co-teacher for their second year. Two years later, when the song leader left, he stepped into the position. It was a perfect fit, since he’d had a long history of performing Americana music at local venues.

The longstanding Folkshul songbook includes songs in Hebrew, Yiddish, English and Ladino. Miron draws from the songbook and his vast folk song repertoire to choose curriculum-appropriate songs for Folkshul students, who range in age from four to 15 years old. Over time, he has introduced many new songs which he felt the kids would like or that spoke meaning to current events.

The songs we sing focus on Jewish culture and values, and they relate to Jewish holidays. Some are just fun singalong songs. Most often, Miron wants kids to learn about social justice struggles through song, and helps give them language to express their values.

Even though Jessica completed the program and Trish moved on after teaching for 10 years, Folkshul has remained an important part of Art’s life. He has stayed a member because Folkshul provides a supportive community of secular Judaism.

Art also values his life as a Mt. Airy resident and member of Weavers Way. The Co-op provides an easily accessible source of good food and other essentials and creates a sense of community for our area.

Miron, a member of the Co-op since 1988, used to do his annual work hours in the store to meet requirements for the membership discount. After the leadership found out about his musical skills, they asked him to perform music as a way to earn his working hours. He was on the rotation of frequent players at $4 Friday dinners in Ambler before the pandemic, and occasionally plays at the Chestnut Hill and Mt. Airy locations.

You can hear Art Miron’s eclectic and inspired music at Folkshul on Sundays online or in person and socially distant. Email Folkshul@folkshul.org for more info.