Youth Discover the Power of Unity in Song Through Germantown Choir

by
Ellen Anagbo, for the Shuttle 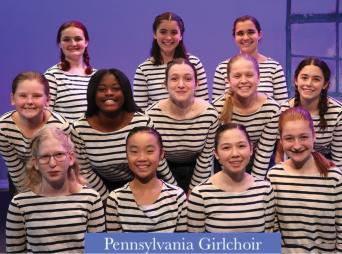 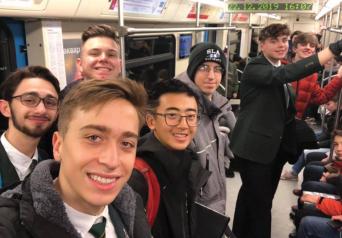 Top: Margalit Eisenstein (lower left corner) with members of the Pennsylvania Girlchoir as part of the off-Broadway show “The Little Dancer” in 2018; Bottom: Elliot Savage (foreground) and some of his KSB choirmates on a Moscow subway last December.

Elliot Savage and Margalit Eisenstein, Weavers Way members and students at Germantown Friends School, have something to say about the power of singing to bring people together.

Elliot, 16, is a singer in the Keystone State Boychoir and Margalit in the Pennsylvania Girlchoir. Both groups are part of the umbrella organization Commonwealth Youthchoirs, a non-profit, community-based, non-denominational arts organization headquartered in Germantown.

Elliot’s history with KSB goes back to second grade, when his teacher tucked a flyer about the choir in his backpack. Elliot’s mom found it, and the rest is history. This past summer, he performed the national anthem with singers from all 50 states as part of the virtual convention for the Democratic National Committee, which he describes as, “one of the greatest experiences of my life.”

CY Founder and Artistic Director Steve Fisher was excited that a diverse group of singers were able to “create this amazing thing and share it with everybody,” despite the current climate of division in the country.

Margalit, 11, joined the Girlchoir last year and has already had the opportunity to perform off Broadway in “The Little Dancer: A Holiday Family Musical.” She described that as “Really fun — a super cool experience.”

“It’s super scary to perform in front of a lot of people, but after it’s done, it’s the best feeling ever,” she added.

According to Fisher, being part of the choir often gives kids the confidence to perform in public in other situations.

“Many kids start out in the safety of the choir, and then they learn they have the courage to sing a solo where they never would have done that,” he said. “Or they learn that they can speak in front of a group of people.”

Fisher, 52, started out teaching at a private girls’ school in his early twenties. “I didn’t realize at 21 the power of making music with young people,” he recalled. “When you have a group of young people who sing well and present well, there is as much power in that as the power of a head of state.”

Over the years, the choirs have had the opportunity to perform for important world leaders, including Pope Francis during his appearance in Philadelphia at the World Festival of Families in 2015. Fisher noted that the leaders “are often the ones who end up in awe of the kids.”

“Music making is the great equalizer,” he added. “It’s not possible to say we can’t work together and be together because they [the singers] do it. They’re doing it right now.”

Besides the choirs, Fisher works on a number of side projects, including the Facebook group Good Things Happen in Philadelphia. The page posts positive, nonpartisan stories about good things that happen in the city. In September, the group raised funds for Find Your Instrument, a nonprofit that partners with under-resourced schools without choirs to provide singing opportunities to students.

The choirs recently recorded a virtual performance for the presentation of the Philadelphia Award on November 4. The video they made is similar to the one for the DNC convention, but this time features smaller groups of singers performing “Philadelphia Freedom” in front of local landmarks.

The experience of performing in the choirs has made a lasting impression on Margalit and Elliot.

“My family is so proud of me,” Margalit said. “I’ve had cool experiences I’d never get to have otherwise.”

Elliot described his time in the choir as “unmatched.” Last December, he and a group of KSB members celebrated New Year’s Eve in Red Square after performing at St. Basil’s Cathedral. The group was part of the first non-Russian choir to sing there in the church’s 2,000-year history. Less dramatic, but perhaps more meaningful was his grandfather’s reaction to a KSB holiday concert he attended.

“[He] was in the audience, just tears streaming down his face,” he said. “I’d never seen him cry before that.”