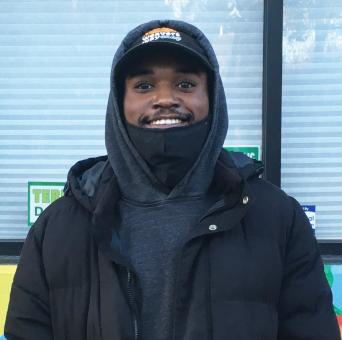 Education: He graduated from Julia R. Masterman High School in 2009 and spent three years as an electrical engineering major at the University of Virginia, in Charlottesville, VA. He left school in 2012 because “I didn’t like math and science as much as I thought I did.”

What happened next: He stayed in Charlottesville and started working at various kitchens in the area. He was working in the kitchen at Violet Crown Cinema, an art house movie theater that served prepared food, in 2016 and thinking of returning to Philly because his lease was up. The Unite the Right protests that took place in Charlottesville in 2017 cemented his decision.

How he got to the Co-op: He was working in the kitchen at Top of the Hill Café in Chestnut Hill and realized he needed to find something else. He found out about openings at Weavers Way through Mt. Airy Cleaner Andrew Dragoni, who’s a longtime friend. He started out part time at the Chestnut Hill and Mt. Airy stores, then eventually came back to Mt. Airy full time.

The Mt. Airy kitchen work strategy: “You have to know exactly how much space you need…but we’re all pretty good about it.”

Long-term plans: “I’m pretty content here. I’m not planning on anything in the future right now. I’ll probably get back to school at some point, but…I’m learning new things, working meat and fish, so it’s like I’m still expanding my horizons.”