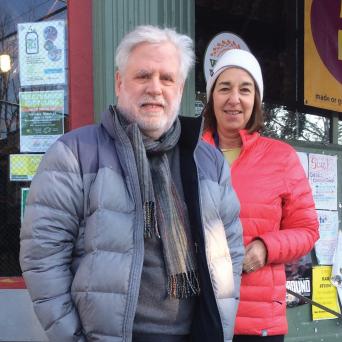 Current jobs: Karen is national features writer for the Washington Post. David just stepped down as the full-time host of WXPN-FM’s “World Cafe,” which is syndicated to more than 200 public radio stations across the country. He’ll continue to record a weekly interview for the show. He’ll also keep doing “Funky Friday” on ‘XPN every week and will begin hosting “Dave’s World,” a free-form hour of music, on Sundays.

Why they joined: Karen: “We were all the way to Stenton [Avenue], and then we had a baby . . . and when you have a little baby, if you’re at home, you’re not part of a school, and we wanted to be part of a community. The whole point of Mt. Airy is being part of a community.” David: "And that means the Co-op.” (They ended up with two children, Nick, now 23, and Cece, who turns 21 this month.)

Co-op work history: David did after-hours cleanup in Mt. Airy before the store was renovated. Karen proofreads the Shuttle. In the past, they hosted the Petapalooza Pet Parade. Karen: “The gig everybody loves is aprons. People used to wait for aprons to be posted on Sunday mornings . . . you could put them in the laundry and watch Sunday television and fold them and bring them back Monday morning. It was the best.”

Favorite Co-op products: They’re wowed by the selection of cheese and fish. They also enjoy Roling’s bagels, Four Worlds pizza dough and Martin’s chicken sausages. David, a self-described “hummus-aholic,” loves the Co-op’s. Karen: “I feel like I’m cheating if I get milk other than Merrymead.” (They do 80-90 percent of their shopping here.)

A little Co-op love: David: “If I were to take somebody to this area to try to explain what Mt. Airy is about, I would take them to High Point and to the Co-op…To me, it’s the center place of Mt. Airy.