Walk for Green Jobs and Justice

by
Eileen Flanagan, for the Shuttle 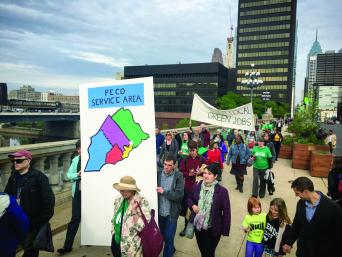 Walking is a tried and true way for activists to demonstrate both their commitment to an issue and the direction they want things to move. Gandhi walked to the sea. King walked from Selma to Montgomery. And starting May 8, the Power Local Green Jobs campaign will walk across PECO’s service territory to show the utility the way to a clean energy future with good-paying jobs for those who need them most.

In each of five counties — Bucks, Montgomery, Chester, Delaware and Philadelphia—walkers will move from the past to the future, from old energy sites to new, past crumbling infrastructure to solar training programs and installations. After approximately 100 miles, the walk will conclude on Monday, May 22, with a march down Market Street from City Hall to PECO headquarters. The final leg will be joined by 350.org founder Bill McKibben and Bishop Dwayne Royster, a founder of Philadelphians Organized to Witness Empower and Rebuild (POWER).

Founded in September 2014, the Power Local Green Jobs campaign targets PECO because of its dominant role in deciding where our region gets its energy. Right now, only 0.25 percent of the electricity PECO delivers comes from solar. The largest utility in Pennsylvania, PECO serves communities with some of the deepest levels of poverty in the state. The campaign demands that PECO shift to 20 percent local solar by 2025, prioritizing rooftop solar and job creation in neighborhoods with high unemployment, which happen to be the same neighborhoods that have suffered the worst health effects from the toxic fossil-fuel economy.

Led by POWER and the Earth Quaker Action Team (EQAT), the Power Local Green Jobs campaign has already succeeded in getting PECO to propose a few solar pilot projects. While far short of the major shift to clean energy and green jobs that the region needs, this movement is clearly in response to the pressure PECO feels after 18 actions, including scenes like 75 people doing “The Electric Slide” outside the company headquarters to tell PECO to “Get Moving” on green jobs.

By traversing the region, the walk will demonstrate the connections between the struggles of neglected communities of color, divested industrial zones and vulnerable rural areas.

To join along the route or for the grand finale, please visit www.eqat.org/walk for up to date information.