A Museum Grows on a Stump at Awbury Farm 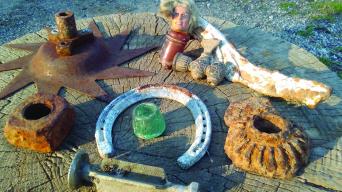 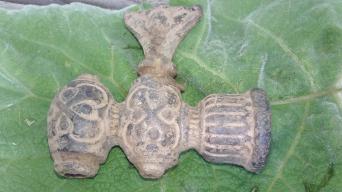 An assortment of objects found in the fields at Weavers Way’s farm at Awbury Arboretum, top, prompted a visit with Germantown historian Alex Bartlett, who quickly identified the object above as a gas-lamp valve.

Two years ago, my farm assistant and I at Weavers Way’s farm at Awbury Arboretum began placing objects we had found in the fields on a stump in our wash shed. The collection — odd bits of metal, a horseshoe, pieces of old bottles — started taking on the look of a miniature antique shop. But although I vaguely knew that Awbury had historical significance, it wasn’t until last season that a couple of new artifacts made me really take interest in our little museum.

First it was a small cobalt-blue bottle with “Bromo Caffeine” molded into the glass. An internet search indicated that this bottle likely was from the late 1890s to early 1900s. Later, as the weather started getting warm — we must have been weeding beets — when one of our cooperators found a curiously ornate valve. It was too small for a hose; maybe it was part of tea set. We decided it was time to contact the arboretum’s archivist, Alex Bartlett.

Alex only needed a quick glance at the valve to know that it belonged to a gas light and probably dated to the 1890s, before electricity was in wide use. The odd pieces of bottles were from a similar time period, with a small brown piece — part of a flask — a little later into the new century.

As we sat in Alex’s office in the Cope House, with its wall-to-wall publications and books and a smattering of artifacts on his table, I couldn’t help but feel surrounded by history, starting with Alex himself. A former field archeologist, he is also the archivist, librarian, collections manager and editor of the Germantown Crier at the Germantown Historical Society/ Historic Germantown, and the archivist at the Chestnut Hill Conservancy.

Growing up in Mount Airy in the 1970s, Alex recalled he could escape to Awbury and feel like he was in a completely different place. He remembered it being less manicured and more overgrown, like a meadow where you wouldn’t be surprised to hear of brush fires. When he was about 9, poking around the remains of one such brush fire, he came across a little old bottle. He took it home and showed his mother, who told him the light pink tint to the glass was an indicator of the bottle being old. With more interest in burgeoning imagination than concern for his safety, she suggested he should check out an old dump site she knew of. His passion for history started then.

The Awbury property started as a summer retreat for Henry Cope, scion of a Quaker merchant family, who purchased it in 1853. According to “A History of Awbury” (1972) by Cope descendant Mary C. Scattergood, it was named after a village in Wiltshire, England, “near to Stonehenge . . .the home of the first Cope.”

Scattergood’s book notes that a few acres in the western block of the Awbury tract were farmed by the Paramores, who sold fruit and vegetables to the Copes and had a horse-drawn bobsled that could be hired. “Fifteen or more young people would be drawn across Germantown with jingling sleigh bells up the Wissahickon to Valley Green,” Scattergood related. The Paramore farm likely encompassed the area that we farm today.

Alex and I pored through historical maps online and tried to parse out the origins of some of the objects in our stump collection. Just beyond our fields, on the other side of the Awbury perimeter wall, was a quarry that operated around the turn of the century. Could this far reach of the Cope property have served as a dump? Did the quarry then end up as a dump after it closed?

We did see evidence of agricultural endeavors on this portion of the arboretum. An aerial photo from 1930 shows vertical lines through the fields, perhaps a hay harvest or plow lines. Another photo, from 1948, shows plots of World War II-era Victory Gardens, which didn’t last long and were absent in later photos.

I asked Alex if we were complicating things for future archeologists by tilling and adding tableware-strewn compost to the fields. (The restaurants that contribute scraps to our composting operation at Saul High School don’t always count the flatware and ramekins at the end of the night.) He assuaged my concern by reminding me that every generation leaves its mark and even this article could come in handy for a future researcher.

Back on the farm, as the heat of the summer started to get intense, our stump museum got a slightly off-putting addition: the head of a Ken doll. I had a fleeting thought that we might be disturbing something we shouldn’t. I am not one of those superstitious farmers, but Ken’s appearance did seem to correspond to a sudden pest outbreak.

At the close of the season, we decided to rearrange the Awbury farm wash station. The stump is empty for the time-being. It might even need to find a new home. But I know that when the season gets going, the collection will be growing again. Everyone is welcome to come out to the farm, and if you chose to volunteer or do cooperator hours with us, who knows, maybe you’ll find something to add to the story!

Brendan Stiteler is the field manager at Weavers Way Farm at Awbury Arboretum. Email him at stiteler@weaversway.coop.