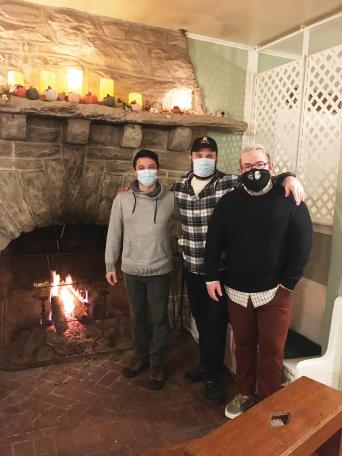 The leadership at Mt. Airy’s Commodore John Barry Club, a/k/a The Irish Center, is banking on a new venture with restauranteur Alex Carbonell to help restore the club to financial health while returning regular dining for the first time in over 40 years.

The Commodore opened last month, offering dining in for members only Wednesdays through Sundays, as well as takeout, delivery via Toast and catering. But a little over a week after their grand opening, Philadelphia re-imposed a ban on indoor dining due to a recent and prolonged spike in cases of COVID-19. Until the ban is lifted sometime in the new year, patrons will be able to try out their menu via takeout or delivery.

Carbonell is the managing partner for four area restaurants: It’s Nutts in Titusville, NJ; Bourbon & Branch in Northern Liberties; Circles and Squares in Fishtown and Pizza Plus in South Philly. He had never heard of the Barry Club until this past spring, when he and his wife, Wally, walked past shortly after moving to Mt. Airy. He had spent months looking for commissary kitchen space to take the foccaccia baking part of their operation — the foundation of their Detroit-style pizzas — away from the cramped spaces of their restaurants in the city.

“My wife wanted to show me a place where they had contra dancing,” he recalled. “…So we roll up to the spot — it was closed — and I see the [Irish Center] sign on the wall and a catering truck in the parking lot. I said, ‘Let me just call’, because most of these places aren’t in use during the day. Maybe they would rent us the place until twelve o’clock or two o’clock in the afternoon.”

John Nolan, the club’s manager, returned Carbonell’s call half an hour later. They had been trying to part ways with the current caterer, who hadn’t paid rent for months before COVID-19 hit. Once that caterer was evicted and Carbonell got in to see the space, he realized there was a lot more to the property than a kitchen.

“We came in here, and I saw the space...all these incredible rooms, and this (the bar and dining area)…this is a restaurant,” he said. “So I said to John, ‘What are you doing here?’”

In recent years, the club relied on rentals and bar sales from catered events to make money — not enough to cover needed repairs and other costs. “If you were a member, you could come here — if John was here —get a drink, and if you wanted to eat, John would just go back there and fry you up some French fries or chicken tenders or a cheesesteak. So they didn’t have a staff.”

Carbonell offered to hire two cooks, as well as bar and service staff, and reinvigorate the dining piece. “The kitchen’s there, the food’s there, the [fire] suppression’s there, the space is already furnished,” he said. “Everything is ready.”

Nolan agreed. They struck up an arrangement in which the club would keep all the alcohol revenue and Carbonell and his partners, Adam Honeycutt and Daniel Gutt, would pocket the earnings from food sales, including catering.

The two boards that oversee the club — the board of the Society of Commodore John Barry (which holds the liquor license) and the Center’s board — initially had some misgivings about the arrangement. They had been petitioning the city to exempt them from real estate taxes and thought going into the proposed venture would endanger that effort. But Carbonell convinced them their potential earnings would more than cover their tax obligations.

Once the wrinkles were ironed out and everyone agreed to move forward, Carbonell put money into updating the kitchen. He also donated the audio and lighting equipment from Bourbon & Branch (which featured live music upstairs before the pandemic) to the Center’s ballroom, with the idea of putting on live shows there once COVID has subsided.

“I really hope that we can make this place enough money so that they can bring their dreams to fruition and renovate the hell out of this place,” Carbonell said. “We’re so close to people, and we’re so big and comfortable. We really hope that people give this a try and make this their local spot.” While the re-imposed restrictions have put a wrench into the Center’s plans in the near term, Nolan is confident and hopeful that good things are on the horizon for the club.

“We’ve gotten a good taste of how it’s going to work,” he said. “Alex’s food will be a good complement, and this is helping us get back to our original mission, which is promoting Irish history and culture.”

The Commodore’s menu includes soups, salads, appetizers, sandwiches, platters and Pizza Gutt pizzas, which are Gutter’s creation and are also featured at Bourbon & Branch, Circles & Squares and Pizza Plus. Many of their offerings include a vegan option.

The Center’s liquor license prohibits them from offering cocktails to go, but once indoor dining restrictions have been lifted, they’ll offer margaritas, classic cocktails and a selection of spirits, along with beer and wine. Both members and nonmembers can order for takeout or delivery. Their full menu can be viewed at www.thecommodorephilly.com.