by
Wendy Greenberg, for the Shuttle 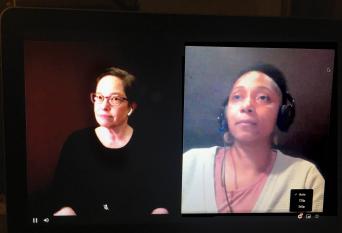 Weavers Way’s first-ever virtual general membership meeting offered an update on finances during a challenging year and insights on how to instill justice, equity, diversity, and inclusion in the co-op culture.

The “urgency is upon us” to put into practice the principles of justice, equity, diversity, and inclusion, Medley said.

PACA brings the area’s food co-ops together to learn from one another. “We learned, and we were not surprised to find, that our food co-ops exist in multiracial and multiclass neighborhoods, but the leadership in our co-ops do not reflect that diversity in its makeup,” Medley said. “This idea of coming together and grappling with race and class in our food co-ops is actually happening across the country.”

She found there were instances where “it was clear that white folks had an established set of ideals, values, and beliefs and other non-white people, poor people, would be welcome if we were willing to get with the program that they had created for themselves.”

One solution lies in the principle that requires co-ops to accept responsibility and tackle poverty and wealth inequality. “There are some tangible things our food co-op leaders in particular can do,” Medley said, including addressing why limited numbers of Black, indigenous, and other people of color are participating on co-op boards and management teams. “We need to make anti-oppression training mandatory and ongoing for co-op leaders in particular.”

The single most important thing to start with, she said, answering an attendee’s question, is “leaning into transparency. We have to acknowledge that these problems exist.”

During the business meeting portion, which preceded Medley’s address, Weavers Way Board President Toni Jelinek said the Co-op is adjusting to the challenges of 2020.

“A year ago, who would have imagined that we would need to limit the number of shoppers in our stores or that we’d be sanitizing every shopping cart, every check-out lane, multiple times a day, or running bags of groceries out to shoppers in their cars?” she said.

General Manager Jon Roesser said that despite the changes brought by the COVID-19 pandemic, Weavers Way is in good shape. The main factors influencing current business performance are a “massive” shift from “food consumed away” to “food at home;” a change in the product mix from prepared foods to packaged and frozen foods, which are less profitable; and customer caps in stores.

Roesser said home delivery and curbside pickup has been “huge,” accounting for 6% of sales but requiring more labor. He noted that extra sick time and paying all front-line employees an additional $2 an hour — “well deserved, and we need to continue to do it,” he said — also have contributed to the complex financial picture.

For fiscal year 2020 (which ended June 30), revenue is $32.3 million, compared to $30 million the year before. Gross profit increased slightly, and personnel costs increased as well. Roesser reported a net loss of about $12,000. Without the pandemic, “we would have been profitable” in fiscal 2020. But co-op sales are up almost 9% in general above industry trends, and our cash position is “excellent,” Roesser said.

Members submitted questions prior to the meeting, including one concerning the viability of the 10% senior discount, which will be a topic in a future forum. In addition, a member asked about the return of the popular Friday night community dinners in Ambler. Roesser said the dinners will resume “as soon as we can all feel safe.”