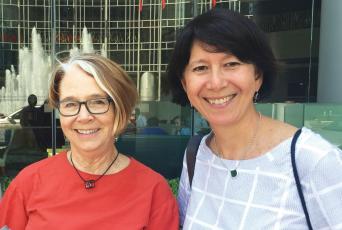 Longtime Weavers Way member and filmmaker Sharon Mullally will present her latest documentary “Beethoven in Beijing,” in a free virtual screening on Wednesday, Dec. 16 in celebration of the composer’s 250th birthday.

The Philadelphia Orchestra was the first American orchestra to visit China, and in the years since their visit, classical music has experienced a resurgence in that country.

Although “Beethoven in Beijing” was filmed and edited before COVID-19 engulfed the world, Mullally believes its central message is particularly relevant during this time of upheaval.

“During the pandemic, we’ve been experiencing the power of the arts to bring us together, comfort us, stimulate our creativity — even while our participation is primarily virtual,” she wrote in an email. “And the theme of the film — the power of music to transcend boundaries and create community — is especially relevant during this time of national and international strife.”

Although the COVID outbreak had no effect on completing the film, it did seriously affect its release, according to Mullally.

“’Beethoven in Beijing’ has been accepted into 14 film festivals, but we still haven’t been able to see it in a theater with a live audience, and that experience is usually the reward for all the time, energy and talent we’ve poured into the production,” she wrote. “But at least geography isn’t a barrier to being able to see it, since we’re sharing it in the virtual setting.”

The film, funded in part through a grant from the National Endowment of Humanities and Pennsylvania Film Tax Credits, was named a finalist in the Library of Congress Lavine/Ken Burns Prize for film. It earned an honorable mention for best local film at the Philadelphia Film Festival and best historical documentary at the San Antonio Film Festival. In the spring, it will air on “Great Performances” on PBS.

Attendance for the screening, which begins at 7:30 p.m., is limited; tickets can be reserved at www.ludwig250.com. The orchestra will kick off the event with a brief performance.