Growing Cilantro Has Turned this Farmer into a Fan 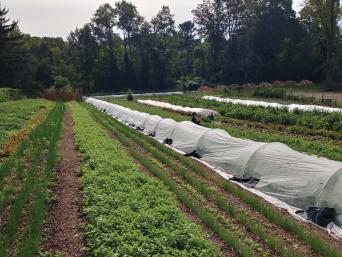 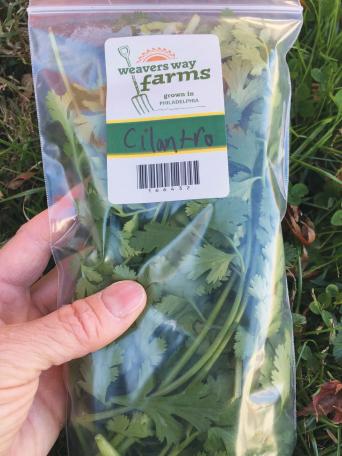 Top: The cilantro crop at Mort Brooks Memorial Farm; Bottom: A bag of farm-grown cilantro, ready for sale in our stores.

Cilantro is one wonderful herb. I know people say about half the population is repelled by it, but I’m not one of them.

It’s not like I grew up eating cilantro regularly. In fact, I probably had it just a few times a year, in salsas or as a garnish. But after growing a 160-foot planting at Mort Brooks Memorial Farm, that has changed!

If you’ve shopped in Mt. Airy or Chestnut Hill the past few months, you may have noticed our cilantro in slender rectangular bags with a Weavers Way Farm sticker. Our cilantro bed was so prolific, we were even able to put it in the 250-member Henry Got Crops CSA, and there was frequently extra.

On several occasions at home, I chopped upwards of two cups of cilantro at a time, and, treating it more as a main ingredient, added it to brown rice with pinto beans and Stryker Farm chorizo sausage. Yum! The zesty, light, lemony properties of cilantro did not overwhelm, even in large quantities, and helped cut the heaviness of the meat.

If you are interested in growing cilantro, in order to get a constant supply of the leaves from just one planting, you are best off transplanting or direct seeding anytime in August. The gradually cooling temperatures of late summer and early fall will keep your plants from flowering and setting seed too soon. It can take a few weeks to germinate, so make sure you keep the ground moist until the seedlings emerge. If you mulch your plants late in the fall, they might even over-winter, depending on the severity of the cold.

For those who want cilantro earlier in the year, it grows well in the spring; just keep in mind that as temperatures warm, the herb will “bolt” and go to seed, so you’ll want to include additional plantings every few weeks for a constant supply.

By the way, cilantro flowers attract a myriad of beneficial insects in the garden. Also, if you let the seed mature into coriander, you can use that in your cooking, too.