Cooperator of the Month: In Memory of Burt Froom | Weavers Way Co-op
Skip to main content

Cooperator of the Month: In Memory of Burt Froom 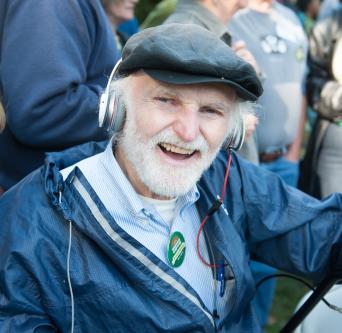 The Rev. Burt Froom, whose life and career took him around the world before bringing him to West Mt. Airy, died June 18. A staunch, stalwart and familiar member of the Co-op, he was 82.

Burt grew up in San Francisco, attended Cal Berkeley, went to seminary in Pittsburgh and was ordained a Presbyterian minister in 1962. He adventured to Europe, Mexico, Israel, Ethiopia and Egypt, did street ministry with youth on the Lower East Side in NYC, pastored churches in Brooklyn and Manhattan and served as a nursing home chaplain. Young Rev. Froom’s first job was as an assistant minister in Homestead, PA. In spring of 1964, he and three other Pittsburgh-area ministers responded to a call to travel to Mississippi to support voter registration. Having grown up in a conservative-to-reactionary family, he said this activism, which included arrest and four nights in jail in Hattiesburg, MS, changed his life.

It is safe to say that this world traveler would never have made his way to West Mt. Airy but for a chance meeting with Louise Lisi in 1977 at a Christmas party at his church in Manhattan. Love blossomed, and Burt was brought home to meet Louise’s family, parents Al and Flora Lisi and sister Carol of Sedgwick Street, founding members of Weavers Way. Burt was a Co-op enthusiast from that point on. After their wedding in 1978, Burt and Louise continued to live in NYC, but Philadelphia visits included shopping at Weavers Way. Louise always yearned to return to West Mt. Airy. They finally settled into a house on Pelham Road in June 1986, along with then 4-year-old Rebecca and 6-year-old Elizabeth.

Burt’s ministry in Philadelphia was pastoral counseling, along and active participation at Summit Presbyterian Church as a parish associate. He taught adult Bible study, championed care for the environment and was active on the social concerns committee. After retiring in 2003, Burt was able to devote significant time to his love of history and of architecture. From 2011 to 2016, he wrote 25 “Yesterday and Today” articles about Mt. Airy history for the West Mt. Airy Neighbors e-newsletter.

Burt truly loved the Co-op, where he got into many meaningful conversations with members and staff, and the family did all their shopping there. He also embraced the work requirement. When the children were elementary-school age, the whole family put address labels on the Shuttle and divided the papers by zip code to deliver them to the post office. After this job was automated, Burt and Louise often packed food — but never meat because of their vegetarian diet.

The couple enjoyed traveling and hiking both in the United States and abroad, and at home they liked to walk to restaurants in Chestnut Hill and then walk home to Mt. Airy after dinner. Burt eventually faced many physical challenges, including difficulties with gait and balance, following decades of profound hearing loss. But he refused to be excused from Co-op work hours. So it was that some years ago, Susan McLaughlin said to Louise, “I think Norman has a job for you two.” Thus began the couple’s annual cooperator shift of packing bags of banana chips and dark-chocolate malt balls to be handed out to trick-or-treaters at Halloween at the Mt. Airy store. Even last October, when Burt knew he had Lewy Body dementia, he and Louise still packed the treats.

The couple have two children and three grandchildren: Micah, 16 months (son of Rebecca Froom and Alec Aman) ; Benjamin, 3, and Alejandra, 8 (children of Elizabeth Froom and Eduardo Maravi). The family, especially his grandchildren, brought much joy to Burt during his struggle with Lewy Body dementia.

“I never knew until now what Burt did for an occupation,” said former Weavers Way GM Glenn Bergman. “Now it all makes sense. Burt was always willing to talk about community, the co-op and its importance to building a community. . . . A true ‘mensch,’ a true friend and a kind person. Thank you, Burt.”

Donations in Burt’s memory may be made to Summit Presbyterian Church (www.summitpres.net), the homecare agency Ralston My Way (ralstoncenter.org) or Morris Arboretum (www.morrisarboretum.org) in Chestnut Hill.