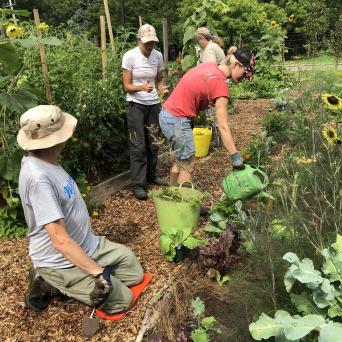 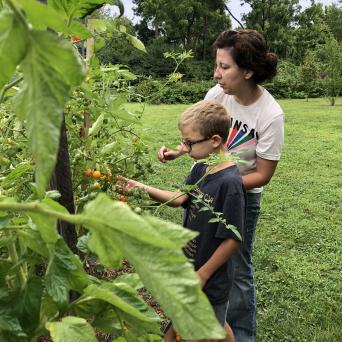 Volunteers tend to the rows that produce the bounty on the bench, top; Shannon Ryan and 9-year-old River Ryan-Endicott assess the cherry tomato crop.

by Judy Endicott, for the Shuttle

"I am what I am because of who we all are.” This is a statement that my son embraced during his work with the Rev. Desmond Tutu, the South African archbishop and activist, on a Semester at Sea voyage in 2008. It refers to the Bantu word “ubuntu,” which refers to the essence of being human. It speaks to the fact that you can’t exist as a human being in isolation. My son, John Paul Endicott, was influenced and inspired by what he saw and learned on this voyage, and he brought this philosophy back home with him along with a newfound appreciation of the level of advantage and opportunity that we have here in America. He saw how people around the world do more with less and believed that we all could collectively do more to help within our own communities.

The Food Crops Garden at Temple University Ambler and our recent connection with Weavers Way are great examples of the power of relationships and working together.

John Paul would be turning 40 this month had he survived a motor vehicle accident in 2010. At that time, he was a student at Temple Ambler and was pursuing a master’s degree in horticulture. It was there that he became passionate about establishing a way to get unused produce from the Temple Ambler community garden on campus into the local food cupboard. His efforts had only just begun.

In his memory, the John Paul Endicott Summer Intern was established in 2011 and his locally grown food donation plan was the impetus for the expansion and establishment of the current Food Crops Garden. As part of their coursework, students in the Temple Ambler food-crops class start plants in the greenhouse and plan and plant the garden before the semester comes to an end. The summer intern then directs garden activities for the duration of the summer. We count on the help of volunteers at monthly work sessions starting in May and ending in September, when the fall semester begins.

This summer’s relationship with Weavers Way has been a boost to our volunteer ranks, but we can always use more! Co-op Working member hours can be earned harvesting and tending to gardening tasks. All gardening tools and supplies are provided.

For the last two years, everything grown in the garden has been donated to Seeds of Hope Community Food Pantry at the Chelten Baptist Church in Dresher. Our freshly harvested produce has been shared in the past with Manna on Main in Lansdale, the Mattie N. Dixon Community Cupboard in Ambler, the Ambler Manor and Seeds of Hope.

Our partnerships with Temple University and Weavers Way are an example of ubuntu. It speaks about our interconnectedness. What we do as individuals affects the whole world. Our connections allow us to reach out and help others. Perhaps you’d like to join us in the garden next summer. We hope so.