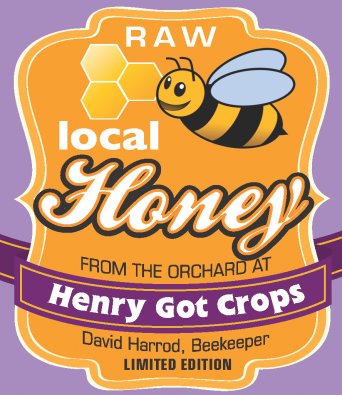 We’re talking 55  5-gallon buckets of honey. Last year, our bees at Saul High School, across from Henry Got Crops farm in Roxborough, didn’t come through. But in 2018 — wow. As a result, shoppers should be able to find the hyper-local sweetener at most Weavers Way locations well into the fall. And that makes David Harrod, the East Mt. Airy-based beekeeper who tends the 18 colonies there, one proud harvester.

“I have figured out what to do to make more honey over the time that I’ve been doing it,” he said. “But also, it’s been a pretty decent year. . . . If it had been warmer in May, we probably would have done even better. But we did all right.”

David, who has a day job as an analyst for J.P. Morgan Chase, started keeping bees 10 years ago. “I was looking for a hobby that would get me outside, but I don’t really like gardening,” he said. “I thought beekeeping would be fun, and it has been.”

The raw honey is light in color with floral notes. “You can taste the difference between this honey and honey that’s made in other parts of the city,” David said. “That floral thing it has going on is kind of distinctive.”

He credits the black locust trees near the apiary with giving the honey its lighter color, although he says this year’s is slightly darker than in the past. “The rain washes the nectar out of the flowers, so I don’t think there’s as much locust in this year’s honey,” he said.

The harvest has been so abundant that David, who also tends a smaller colony behind a friend’s house in Upper Roxborough, may not harvest what remains, leaving it instead for the bees to feed on during the winter. Normally he would supplement them with sugar water if needed.

Weavers Way Farm honey is available in bulk and jars at the Farm Market, and in bulk only in Ambler and Mount Airy. One-pound jars are $13.99 each; the bulk price is $11.99 a pound.