Goats in the City? That's Not a Baaaahd Idea | Weavers Way Co-op
Skip to main content

Goats in the City? That's Not a Baaaahd Idea 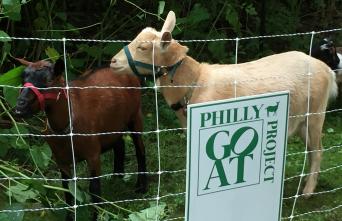 by Laurie T. Conrad, for the Shuttle

Goats — they are so much more than chèvre and YouTube videos.

In one determined woman’s view, goats are a gateway to cleaner, safer, happier city neighborhoods. Karen Krivit is working to make that perspective a reality with the Philly Goat Project, which counts Weavers Way’s Mort Brooks Farm among its neighbors at its home base at Awbury Arboretum.

That unexpectedly bucolic city setting off Washington Lane is where Philly Goat Project founder Krivit and her mostly volunteer team tend a herd of five goats already in demand as four-legged weed-whackers.

“Poison ivy is their favorite,” says Krivit, as if anyone needed another reason to think goats are cool. “I gave them pasture with gorgeous wheat and alfalfa. They didn’t like that. They like junk food.” They also favor invasive Japanese knotweed and kudzu. And, just in time for autumn, fallen leaves.

Krivit adds, “We have a waiting list of people who want them to clear their yards.”

Yes, the three miniature goats in the herd do goat yoga classes, but with a difference. First, the classes are fundraisers for the Philly Goat Project, and second, unlike in most goat yoga situations, these aren’t babies that are basically prodding yogis ISO their mother’s teats or a bottle. These goats are adults and the classes help them acclimate to people, Krivit explains.

“They love the attention. They love climbing. I know they like it because they always play,” she says. “They are litter-trained, for the most part,” Krivit adds, knocking on a wooden picnic table for luck while keeping a wary, loving eye on her admitted favorite, a honey-colored mini named Anthony who’s standing on said table.

A longtime social worker, Krivit envisions the project as a way to teach husbandry in a city setting and to cultivate environmental awareness. Goats take well to human kids and make great therapy animals, too. They’re smaller, sturdier and easier to take care of than, say, cows or horses. Then there’s the fact that they’re food producers.

“Philadelphia doesn’t have goat raising as a business. . . . It’s something a lot of people can do,” Krivit says. (Philadelphia only allows “farm animals” — including goats, but also, notoriously, chickens and pet pot-bellied pigs — on parcels of three or more acres, a bill that Awbury fills.) She believes the Philly Goat Project is the first such program in the country that has multiple goals. It also has multiple funding sources, including grants, donations and fee-based activities.

Food production is a down-the-road goal but one Krivit hopes the project will achieve. Already, there are community programs and school visits at Awbury, and the goats have lent authenticity to historical events — they are even scheduled for a meet-and-greet with volunteers at Germantown’s historic Hood Cemetery. Animal therapy is offered for individuals and groups.

Speaking of can-do, Krivit has a lot of that. The project began in February, when Krivit and “all my friends and family” began clearing an overgrown dumping area and digging 56 postholes to create space for a pen and small barn at Awbury’s Agricultural Village. The goat area nestles against a 100-year-old stone wall. Goats are low-maintenance, but they do need a safe, dry place to call home. In fact, ensuring the goats’ safety wherever they travel is priority No. 1 for Krivit.

“It’s no joke. This is a city,” she says. “People do stupid things. [Awbury] is a public place and people can walk through.”

Familiarity breeds friendship, though. Community goat walks are held regularly “so people can know about the goats and share our love for them.” Her always-in-need-of-more volunteer team draws members from the neighborhood, too.

Krivit spent a year shadowing breeders, dairy farmers and other “incredible” mentors to learn goat husbandry. Her lack of prior knowledge is itself a teachable moment: “You don’t have to go to school to do something well, or have it in your family.”

Alessandro Ascherio, Weavers Way’s Awbury field manager, has been there “every step of the way” as the goat project has unfolded — “just neighbors who adore each other,” Krivit says.

Ascherio likes Awbury’s newest partnership for its “friendliness and community.” It doesn’t hurt that, “in the long run, they are going to clear out a lot” of overgrowth on the Arboretum’s 55 acres.

Finding goats for the herd, which Krivit hopes to expand to 10 goats next spring, was a challenge, as owners are often reluctant to part with their animals. The three small ones, a set of twins and their half-sibling, all born in March, were purchased for the Philly Goat Project. The standard goats were donated on the condition that they wouldn’t be separated — and that they’d be of service.

Google “goat videos” and you get, no lie, 108 million YouTube hits. But when they’re not gamboling in pajamas or kneading giggling yogis, goats could be creating jobs and products for Philadelphia residents, helping people cope with mental-health issues, widening schoolchildren’s worlds. And eating poison ivy. 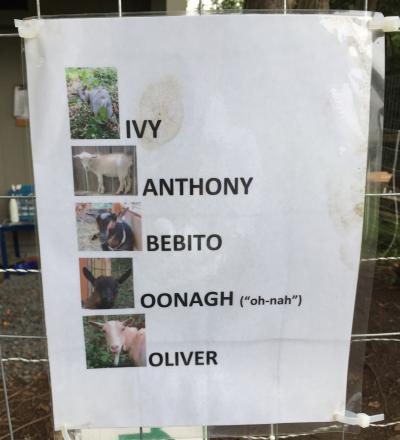 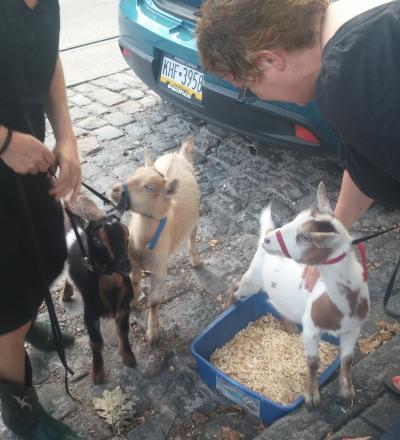 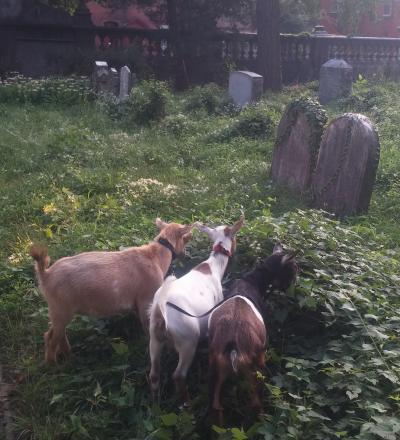 Ivy shows just how tidy goats can be when they visit, as at a recent trip to Hood Cemetery in Germantown.