What's Biochar? Field-Test It Yourself 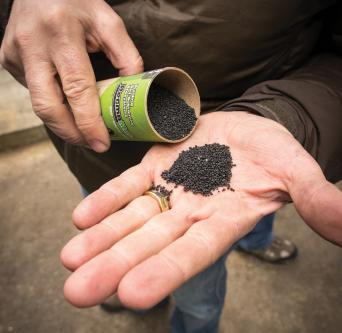 A sample of ready-to-apply biochar

Biochar — what is it?

Biochar is a solid material obtained from the carbonization of organic matter in an oxygen-limited environment. It is produced by the decomposition of organic material under a limited supply of oxygen at relatively low temperatures. The process is similar to the production of charcoal, but biochar differs from charcoal in that it is used as a soil amendment. It improves soil function and emits less greenhouse gas than plant material, or biomass, that decays naturally. Charcoal briquettes are made at lower temperatures, in a smoldering process that is also highly polluting, that allow tars and oils to remain and produces a good cooking fuel, but not a good material for your soil. Biochar uses a higher temperature than charcoal briquettes; most of the tars and oils burn out and leave a pure carbon char composed mostly of carbon and minerals.

There are many different kinds of biochar. It can be made from wood, grasses, bamboo, nut shells, corn cobs, fruit pits, rice hulls, manure and bone. All these materials have different properties resulting in different content of ash and minerals.

So how is biochar supposed to help our environment?

Some consider the creation of biochar to be a 2,000-year-old practice that converts agricultural waste into a soil enhancer than can hold carbon, boost food security, increase soil biodiversity and discourage deforestation. The fine-grained, highly porous charcoal helps soils retain nutrients and water.

Biochar is found in soils around the world as a result of vegetation, fires and historic soil-management practices. Biochar-rich earth in the Amazon has led the way to discovering its unique properties as a soil enhancer. It could be an important tool to increase food production and diversity in areas with depleted soil, lack of organic resources and inadequate water supply.

Increasing the retention of nutrients and agrochemicals in the soil may also improve water quality. Nutrients stay in the soil rather than leaching into groundwater and causing pollution.

According to the International Biochar Initiative, the carbon in biochar resists degradation and can hold carbon in soils for hundreds to thousands of years.

Biochar stimulates the activity of soil microorganisms. Because it attracts and holds nutrients, it can reduce fertilizer requirements.

How can we actually use biochar in the soil?

It is best to add biochar in small amounts every year and allow it to slowly build up in the soil. The amount could vary from as little as 1 percent and as much as 20 percent.

In many cases, it is necessary to charge biochar with nutrients and microbes before use. This depends on the soil pH and the amount of biochar used.

If a large quantity of biochar is to be added, it is best to add nutrients at the same time. The best way to charge biochar is to compost it with other organic material.

Testing soil pH after application is a must, as biochar could raise pH to harmful levels because of its high wood-ash content. In addition, soil with large amounts of biochar added should be mulched, as it can wick water to the surface where it evaporates and dries the soil surface.

Many field studies have been performed using biochar in a variety of locations, soil types and climates, with  mixed results. Corn yields showed large increases in some control plots while others showed no difference and some a decline. Rice field studies showed little increase in yield. But wheat production in Australia showed significant yield increases with the application of biochar.

My personal belief is that organic practices and the creation of humus from the composting of all organic material is still the solution to our agricultural problems — not the addition of some new material created by burning stuff in factories. Cutting back on emissions we are spewing into the air is also a fundamental requirement for environmental well-being in the future.

That said, it appears that small amounts of biochar added to the soil can be productive, especially when composted first with other organic matter. Biochar can improve the water- and nutrient-holding capacity of the soil but it is not a fertilizer.

A better understanding of the variables of how biochar is produced and how it is used needs to happen before biochar can be recommended.

The biochar market is still in its infancy but there are sellers. A good place to start is your local garden center. Buy a bag of biochar and do your own field test. It can be done simply in two small raised beds or in containers. I would be very interested in hearing about your results!