The Co-op’s Role in Improving Our Food System 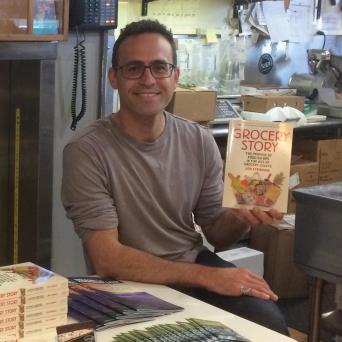 Editor’s Note: The following are excerpts from “Who Owns Your Grocery Store?”, Jon Steinman’s article that appeared in the Dec. 6, 2019 online edition of Yes! magazine.

I spent 13 years investigating every facet of the food supply. It led me to the conclusion that the grocery store is the most influential force shaping food, the planet, and our health. So I wrote a book about it, bought a tour van, and took the book on the road. The message I’m sharing is that it’s time to pay a lot more attention to who owns the grocery stores where we shop.

We have invested considerable energy over the past decade into deepening our understanding of how and where food is grown and who grows it. Organic food has exploded into a $50 billion industry in the United States. Farmers markets are thriving. But there remains a cavernous gap in the effort— where we buy our groceries. If 10% of our weekly food budget is spent at a farmers market, what about the other 90%? It’s almost certainly being invested in a grocery store. So what are we investing in?

It All Started with Walmart

After Walmart’s explosion into grocery in the late 1990s and early 2000s, waves of grocery mergers and acquisitions followed, leaving only a handful of grocery giants operating in any one geographic area. As I traveled through the eastern states this past spring, it became clear few people are aware of the companies behind the banners. The once regional chains are no longer so regional. Hannaford, Food Lion, Giant, Stop & Shop are all now subsidiaries of Ahold Delhaize, based in the Netherlands. Fred Meyer, Harris Teeter, and Ralphs are now Kroger banners. Safeway, Shaw’s, Star Market and Vons are all now part of Albertsons.

With the exception of some areas of the country where fierce grocery store battles are playing out, we eaters are generally at the mercy of one of a few giants. In rural communities and many urban neighborhoods, there might be just one option available.

“Well, that’s capitalism for ya,” some will say. But grocery stores are not just some other business; rather, they bear tremendous social and economic responsibilities.

Take human health. Studies show that the common cold, diabetes, and heart disease can be prevented, curtailed, or managed through the foods we eat. What responsibilities have we placed upon these grocers? What have we done to ensure all people are provided access to healthy, risk-free food in their neighborhoods? Not much. We’ve left the health implications of our grocery stores in the hands of market forces.

The Grocer’s Imprint on Food and the Economy

A grocer’s economic role is also deserving of scrutiny. Ten years ago, it was nearly impossible for local food producers to get their products on the shelves of a major national chain operating nearby. Whereas some progress has been made in this regard, there remain many producers who continue to face substantial barriers when trying to access the shelves of their regional grocers. These barriers throttle local economic development and diminish the wider social benefits that extend from the presence and growth of local businesses.

For the last century, grocers have also been shaping the food system. With only a handful of grocers dominating any one region or nation, they have effectively acted as gatekeepers to the foods that will and won’t make it to market.

How might a grocer’s commitment to our community be sustained for generations to come? I believe it comes down to who owns your grocery store. It should come as no surprise that the most locally-owned grocer is most likely to be the most accountable and responsive to the community it serves.

As long as our neighborhood grocer is privately owned, any assurances of long-term commitment are precarious. Just as closures of chain stores are commonplace, so too are closures of independent, locally- owned grocers.

Acquisitions are also a risk to the future of the grocery stores in our neighborhoods. Community consultations are not required, despite the enormous repercussions at stake. If it’s a change in ownership, the unique characteristics that may have set a store or chain apart often erode into the culture of the acquiring chain. The accountability and commitment to the community often goes with it.

In August of last year, Musser’s Markets, with three locations in Lancaster County, was acquired by Giant. In 2015, Chicago’s Mariano’s, with 44 locations, was acquired by Kroger. The culture change at Mariano’s is not going unnoticed. An August 2019 article in Crain’s Chicago Business magazine reads, “Is Kroger ruining Mariano’s?”

Where Food Co-ops Come In

So where can eaters find greater assurance in the future of their grocery stores? Food co-ops. There have been zero instances of a food co-op in America being acquired by a chain grocer. Why? It would first require a vote by the co-op’s thousands of shareholders. There are examples of food co-ops closing, but any decision to change the ownership is made by the people who would be most affected by the decision: eaters and workers. Community consultations on the future of neighborhood grocery stores are built directly into the cooperative model of ownership.

Consumer food co-ops spread ownership out to however many people want to join. There are no limits to who can become a shareholder, nor how many shareholders can co-own the store. Better yet, no one shareholder has any more voting power than another. So co-ops democratize the economy.

We’ve generally placed any business or service that a community deems ‘essential’ into a different category of oversight and expectations. Public transit, public libraries, drinking water and the like are generally stewarded by public agencies and institutions.

Co-ops are, effectively, public institutions. They build accountability to the community into the ownership model. They allow the public to steward the food system from the grocery store.

While a food co-op may be a for-profit business, they operate far more along the lines of a nonprofit business. Every dollar of profit generated at a co-op is channeled into improving the business or is returned to shareholders in the form of dividends proportional to the level of purchases a shareholder made over the previous year.

As a shareholder of a food co-op, I’ve received checks as low as $10 to as high as $50 at the end of the year. The grocer is essentially saying to its customers, “Sorry, we charged you too much this year, here’s how much we overcharged you.”

A food dollar spent at a co-op doesn’t end with the distribution of profits. The head office is almost always located directly inside the store. As a result, the co-op creates more full-time positions. Marketing, human resources, finance, and outreach managers are located within the community.

Today, 230 co-ops operate over 300 locations in the United States. Another 100 are in various stages of development. Of the 144 new food co-ops that have opened in the past 11 years, 72% of them have weathered the challenging grocery retail climate and have remained open. All types of communities, including those in designated food deserts, are turning to this model of grocery store ownership to secure a more promising future for their communities.

Jon Steinman is the author of “Grocery Story: The Promise of Food Co-ops in the Age of Grocery Giants” (New Society Publishers)