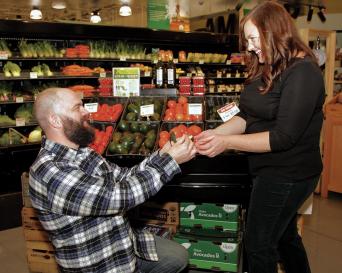 It’s not every day you witness a marriage proposal in a grocery store — even at the Co-op. But some lucky shoppers got to see member Dave Cameron pop the question to Diana Bayless on Jan. 12 — almost two years to the day they met over avocados at Weavers Way Ambler.

Dave and Diana now live in the borough, but when they met in March of 2018, he was living in Green Lane. She was chatting with a woman conducting a demo in produce. “I had just walked into the produce section, and saw [Diana] across, and she caught my eye,” Dave recalled. “I was casually shopping, kinda hoping to get a chance to talk to her, and we had a chance meeting over at the avocados.”

Truth to tell, the Shuttle was in on the secret; Dave decided to move up his proposal date after I contacted him about an article on how they got together.

For the record, Diana was surprised and said yes. “I’m so stunned,” she said immediately afterward. No word yet on a date.