Open-Fire Cooking Every Day Is No Picnic; StoveTeam Offers a Healthier Alternative 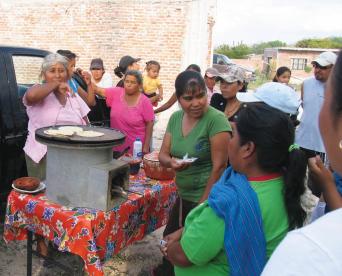 The radically improved air quality of the 2020 coronavirus global lockdown is making headlines, especially in the Global South. The Taj Mahal is suddenly smiling under bright blue skies, and the Himalayas are visible from 100 miles away, a sight not possible in decades. People suffering with respiratory ailments are cutting down on their use of inhalers due to breathing cleaner air.

But for the hundreds of millions of women across the globe stuck cooking with stone-age tech — open fires — the air surrounding them is as polluted as ever. Inefficient burning of wood not only generates toxic smoke that fills cooking sites, it also emits particulates that contribute to global warming. Cooking over an open fire day in and day out is a slow-acting public health scourge.

Open fires have other downsides as well. Young girls are often tasked with wood foraging; as populations expand, it means they must spend more time traveling and then lugging the wood home over those longer distances. That’s time they should be in school. It also leads to deforestation and accompanying soil erosion, a downward spiral of environmental degradation.

Fortunately, designers have been tackling this problem, and over the past decade, many affordable, clean cookstove designs have come to market. They’re also called high-efficiency stoves. Either name gets at what they accomplish: creating flames hot enough for cooking while generating far less smoke.

Such a stove creates multiple benefits. Less fuel is needed, freeing up some of the girls’ wood-collecting time for more productive pursuits. If families buy wood, they now put 50% of the daily fuel bill in their pockets. And the cooks and their kids are no longer exposed to toxic smoky air, improving everyone’s health, nor are they at risk of getting burned by the hot open flames.

Stove designs vary according to local/regional cooking styles. The first stoves, created in design labs without women’s input, were roundly rejected. Subsequent designs are now continually tweaked by engineers co-creating stoves with the women who use them.

StoveTeam, a Dining For Women grantee from a few years ago, is such an initiative. They designed, manufacture and disseminate their signature Ecocina stove. It’s sturdy and affordable, generates almost no smoke, cuts black smoke emissions by 80% and uses half the fuel of a conventional open fire. As an added bonus, StoveTeam also creates local jobs at their factories.

StoveTeam is producing tested, culturally appropriate, affordable cookstoves styled for Central American cooks. Their stoves include space for a deep pot to cook on top, as well as a plancha for tortillas and the like resting across the top.

And, great news for those of us who are distressed by how much carbon our air travel generates (remember when we flew places?!): StoveTeam is now offering direct Gold Standard-certified carbon offsets. This certification confirms a stove’s carbon-offsetting efficiency and verifies that cooks actually use their stoves.

One donated Ecocina offsets 10.5 tons of carbon dioxide over the course of its multi-year life, the equivalent of many cross-country flights. The cost is $50, tax-deductible, all going direct to StoveTeam. Contributing a stove is a great way to clean up our carbon and help people improve their health and bottom line — a triple play. For more information, visit stoveteam.org/carbon-offset-donate.