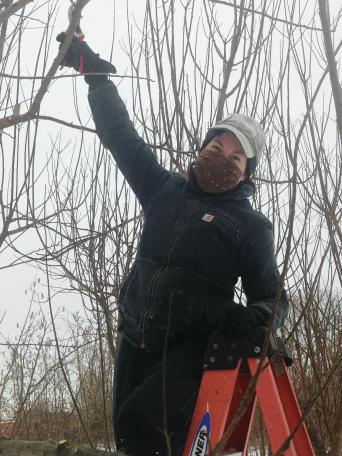 There will be some new but otherwise familiar faces around the Henry Got Crops farm this season. Previous Field Manager Josh Parr is looking to expand his farming experiences and will be working at a different farm outside of Philadelphia for the 2021 growing season. Meanwhile, Chelsea Mackie will be taking the reins in his place as the new field manager at Henry Got Crops.

Josh started with us as an assistant in the 2018 growing season at our Mort Brooks Farm at Awbury Arboretum. At the end of that season, he was eager to take on new responsibilities and in 2019 transitioned smoothly into the role of co-manager of Henry Got Crops. At the end of 2019, the opportunity arose to manage that site on his own and he gladly took it on.

Josh likes to see things through, and for that we are grateful. Managing the Henry Got Crops site is no small task, with the comings and goings of CSA shareholders, farm market customers, and teachers and students from Saul, not to mention the volunteers. Last year, all that happened during a pandemic!

He has an eye for efficiency and the gift of analysis, and he put these skills to good use on the farm. Among the lasting improvements he made were a new crop rotation, bed marking systems, and a crop profitability analysis tool. Josh put together a thoughtful planting plan for 2021 before leaving, which positions our new field manager for a successful first season. This plan, as well as Chelsea’s existing familiarity with our farms, will allow her to hit the ground running.

Chelsea has already worn many hats with us at Weavers Way Farms. We first met her when she was a shareholder in our CSA and volunteered weekly on the farm. While there, she was bitten by the farming bug and went on to gain a more in-depth experience as a farm apprentice at Pennypack Farm in Horsham. She also has spent a full season with us as a field assistant, working on both of our farms as well as at the Henry Got Crops farm market. We are excited to have Chelsea in her new role, given her well-rounded experience at Pennypack, and her familiarity with our farms. Chelsea also has a background in sustainable engineering to boot!

We are fortunate that many other farmers and farm market staff from 2020 will return for the new growing season. Look for an article in the spring re-introducing them, along with our new crew!