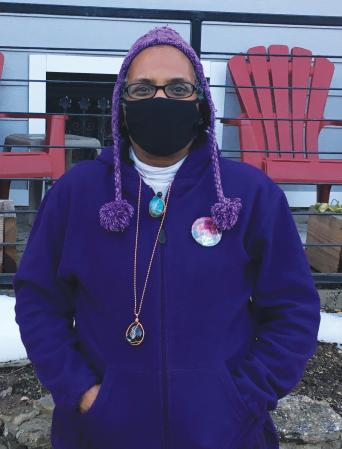 Family facts: She and her husband of 32 years, Ras Ben, are the parents of seven children (five sons and two daughters), ranging in age from 14 to 31. They also have an eight-year-old grandson.

Education: She earned a bachelor’s in Spanish with a minor in education from Howard University in Washington, DC.

How she got to the Co-op: After spending several years helping Ras build his home-based crystals business, she was looking for a way to supplement her family’s income. Mt. Airy Front End Manager Susan McLaughlin, whom she knew through their work on the community garden at Penn and Greene streets, suggested she apply. FYI, she’s been a member of the Co-op since 1996.

Thoughts on the job: “The spring and the summer I would say was the most stress I’ve experienced being here…people were really edgy and nasty with each other and us as cashiers….[but] for the most part, our shoppers are very polite…on any day, eight of 10 shoppers are going to be courteous and kind.”

Favorite Co-op products: Organic produce, Oatly oat milk and yogurt. She and Ras are vegan and raised their kids (four of whom still live at home) to be vegan also. She estimates they do 90% of their shopping at the Co-op.

Thoughts on the Co-op: “I’ve appreciated the expansion and change and growth that I’ve seen at the Co-op…I think it’s encouraged more diversity. I’d like to see more, of course, but I think that was a significant step in the right direction.”