And You Thought Your Representatives Represented You: ‘Marcellus Money and the Pennsylvania Legislature’ | Weavers Way Co-op

And You Thought Your Representatives Represented You: ‘Marcellus Money and the Pennsylvania Legislature’ 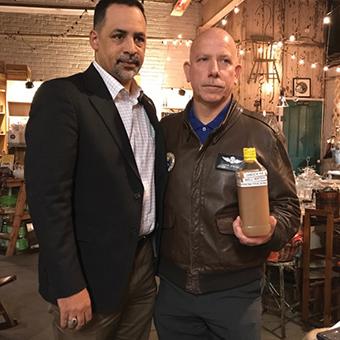 It would be nice to think we actually lived in a democracy, but that doesn’t seem to be the case. Even here in Pennsylvania, much of our welfare is decided upon by lobbyists.

What? You’re not surprised?

On Nov. 28, Weavers Way’s Environment Committee hosted a panel and discussion on fracking featuring Delaware County State Rep. Greg Vitali, an active environmentalist in his 13th term in the General Assembly. He was introduced at the event, held at the Mercantile in Mt. Airy and cosponsored by the Women’s International League for Peace and Freedom, by our own Philadelphia State Rep. Chris Rabb.

While the focus was on fracking, Vitali’s presentation could relate to other issues as he described the influence of lobbyists. In Pennsylvania, we have 203 lobbyists from the gas and oil industries, and we have 203 representatives. These lobbyists have spent over $66 million since 2007 “educating” our elected officials on how to vote. And Pennsylvania is the only gas- or oil-producing state that has no severance tax.

Vitali presented a list of state officials who received the most contributions from fossil-fuel interests. Senate President Pro Tem Joseph B. Scarnati received nearly half a million dollars. And while we know the amount of political contributions, gifts are another story.

While monetary gifts are supposed to be recorded (and often they are not), gifts “in kind,” like the all-expenses-paid football trip Scarnati reportedly received, are rarely acknowledged.

Vitali described how you can go into any restaurant in Harrisburg when the Assembly is in session and find lobbyists wining and dining legislators; the lobbyists generally pick up the tabs. Pennsylvania is only one of 11 states that has no limit on campaign contributions; Vitali says we really need a ban on gifts.

While there is a bill to add a severance tax on gas drilling, Vitali will not sign onto it. Here’s why:

Riders to the bill include one allowing a third party instead of the state to award drilling permits, and another knocking out the methane-reduction program. During fracking, methane is vented into the air, instead of being captured. Remember that methane is 25 times more potent in creating greenhouse gases than carbon dioxide.

While some states are moving toward more sustainable energy, Vitali noted that only 4 percent of the energy used in Pennsylvania comes from sustainable sources.

What to do? Vitali believes it is crucial to elect more ethical legislators to make the changes we need. He also believes the courts have a chance of blocking harmful legislation. Vitali advises donating to environmental groups, like the Delaware Riverkeeper Network, who have the ability to sue. He also suggests supporting environmental groups like Food and Water Watch and others who can flood legislators with environmental petitions. Vitali believes there is a chance we can ban fracking in the Delaware Basin but not in the entire state.

After Vitali’s talk, Gayle Simmons from the Women’s League showed photos of her visit to Dimock, Susquehanna County, where residents’ drinking water was polluted during the fracking process. She described the beautiful countryside and seeing the devastation of abandoned homes, ponds with dead fish and methane-spewing wells in front yards.

Even more impactful was the presence of Craig Stevens, a sixth-generation landowner in Montrose, about 5 miles north of Dimock. He travels around the country to educate the public about the horrors of fracking, and brought with him a sample of his mustard-colored well water, which cannot be used even for bathing because it contains diesel fuel, among other toxic substances. He described how gas-drilling companies temporarily supplied water to residents whose wells they poisoned in return for their silence. He believes his appearances in Florida were critical in getting that state to ban fracking. Contact Craig at ciscraigstevens@earthlink.net or 949-456-6104.

John Randolph from the organization MarchOnHarrisburg invited others to join him to stop official corruption in Pennsylvania by visiting marchonharrisburg.org. Because corruption affects all issues, including fracking, MarchOnHarrisburg is also advocating for a gift ban for public officials and an end to gerrymandering.

Another participant was Tammy Murphy, representing Physicians for Social Responsibility. She wants people to join her in writing letters to editors; contact her at tammy@psrphila.org or 215-749-0960. I noted that letters to smaller papers across the state have a greater chance of being published, which has been my experience.

The scariest issue for me is how the gas-and-oil industry has succeeded in keeping serious water and health issues secret. We know that asthma and cancer rates are significantly higher within a half mile of wells. Yet research into health effects is stymied by the industry’s ability to buy silence. Because victims’ resources are limited and they have medical needs, they are dependent upon industry handouts, which come with gag rules attached. Meanwhile, huge amount of water needed for fracking becomes poisoned and can never be used again. What to do with this water is a serious problem because when it is stored in flimsy plastic containers, it can easily seep into ground and surface water.

We should take Vitali’s advice and work to elect more legislators who can’t be bought. We need to be active in environmental groups, and write letters to editors about the harm of fracking.