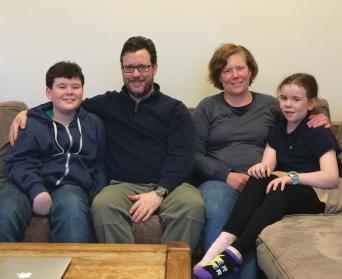 Live in: Mt. Airy, less than a block from the Co-op

Day jobs: Sean runs Sports Reference, an online site that manages statistics for the four major pro sports as well as college basketball and football. Sylvia, a former math professor at St. Joseph’s University, is in the middle of a career switch: she’s taking classes in public health at Temple. They have two children: Carl, 12, and Elinore, 9.

How they ended up in 19119: Sean: “ I got a job at St. Joe’s, and we were going to move to Philly, and neither of us had ever been to Philly. Sylvia was a member of New Pioneer Co-op in Iowa City, and we looked on the Internet [to find] co-ops in Philadelphia…We kind of thought that would be a place where we’d want to live.”

Working member history: They took a break from being Working Members when the kids were young, but re-upped when Sylvia left her job. She does all the family’s hours.

Favorite Co-op jobs: Sylvia mostly works in Bulk or Across the Way, but has done various jobs in the Mt. Airy store. “I like working there. One of the first times I worked there, I was packing Noreen’s chocolate chunk cookies, which I had never even noticed before, and I could hardly wait for my shift to end so I could buy some.”

Loyal shoppers: They get about 99 percent of their groceries at the Co-op, according to Sylvia. And Sean’s company leases office space at Summit Church down the street, so he and his staff walk up to Greene and Carpenter most days to get lunch. Says Sean: “We’re probably there 20 times a week.”

A little Co-op love: Sylvia: “We know a lot of the people — sometimes from working there, but also from shopping there. So there’s community that way, and also with other people who shop there.”